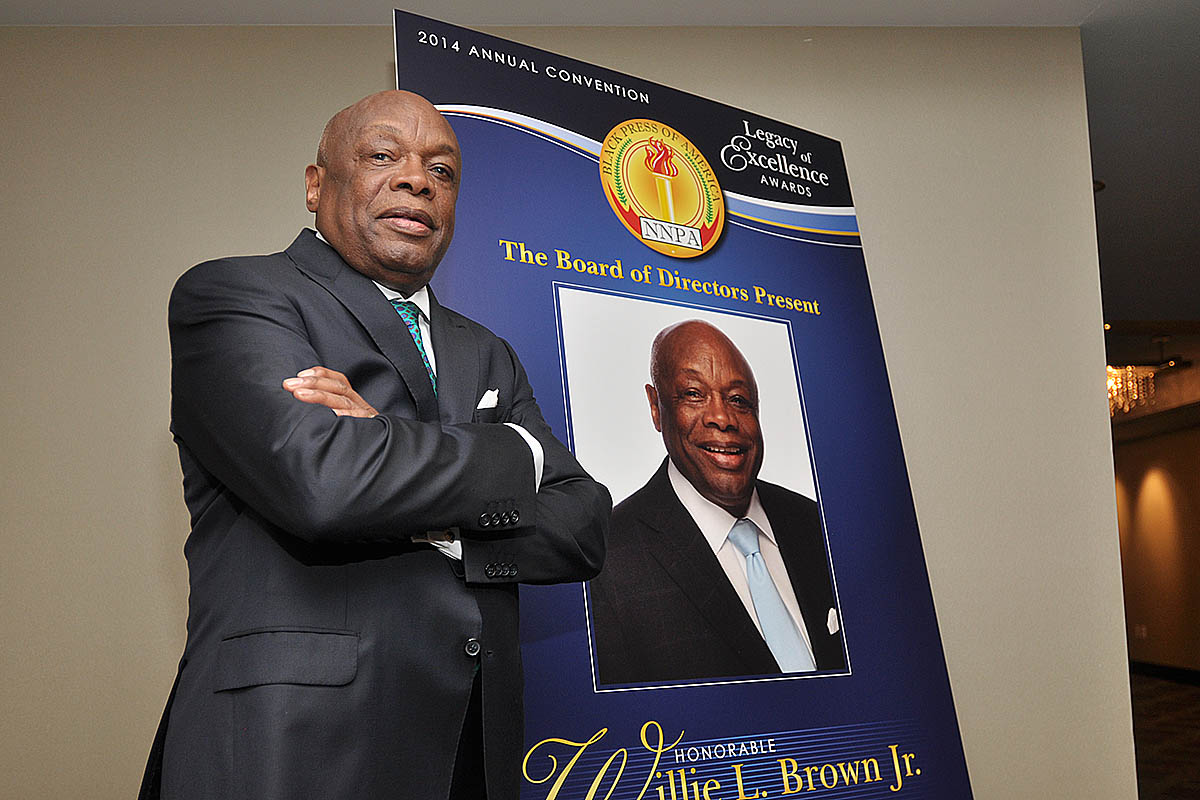 The award was presented to Brown at the NNPA’s annual convention here.

After recounting his days as a paperboy for the Bay area’ s Sun-Reporter,  Brown said, “Your role in the African American community is unparalleled.”

He said today, as in the past, Black readers rely on the Black Press more than White-owned publications. He said discussions in local barber and beauty shops center on what was published in that week’s Black newspapers.

“They don’t read the other papers first – they don’t believe them,” said Brown, who served 15 years as speaker of the California Assembly before serving as mayor. “You represent the source of inspiration, the sense of accuracy.”

Even though he is out of office, Brown is helping avert a transit strike in San Francisco and returned there shortly after accepting the award.

“Mayor Willie Brown’s name is synonymous with excellence,” NNPA Chairman Cloves Campbell, publisher of the Arizona Informant, said prior to the ceremony. “He spent three decades in the California State Assembly – half of that time as speaker – forging coalitions and working tirelessly on behalf of Blacks and other disadvantaged groups.”

Born in the small East Texas town of Mineola in 1934 during the Jim Crow era, Brown moved to California at the age of 17 to live with an uncle. He worked his way through San Francisco State University, graduating with a degree in liberal studies and earned a law degree from the University of California. Along the way, he held a variety of jobs, including working as a janitor and as a doorman to pay for his education.

He was elected to the California Assembly in 1964 and rose to speaker in 1980, a position he maintained until 1995. No speaker served as long before Brown and thanks to a 1990 term limitations law, none are likely to serve as long in the future. In 1996, Brown won the first of two terms as mayor of San Francisco.

Brown was one of the most powerful speakers in the history of California, nicknaming himself the “Ayatollah of the Assembly.” But even the “Ayatolla” was not invincible. While a state lawmaker, he was diagnosed with retinitis pigmentosa, a heredity disease characterized by a gradual loss of peripheral vision, sometimes resulting in blindness.

He has not let the disease limit his activities, working as a radio host and making several cameo movie appearances. His reputation extended far beyond California. He was as well-known for his flamboyant style of dress as his political clout. Some days he would change clothes three or four times. Many of his tailored suits were made in Europe and he capped off his fastidious dress with hats. He was a target of several FBI stings, none of them successful.