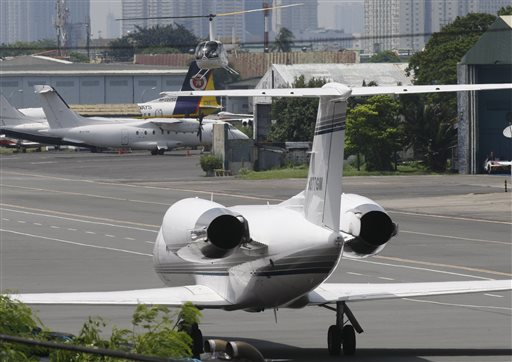 A Gulf Stream private jet chartered by Grammy award-winning singer Chris Brown, sits at the end of a taxiway housing private hangars of the Manila Domestic Airport at suburban Pasay city, south of Manila, Philippines Thursday, July 23, 2015. Chris Brown, who performed at a packed concert Tuesday night, was barred from leaving the country following fraud allegations against him and his promoter for a canceled concert last New Year’s Eve in the Philippines. (AP Photo/Bullit Marquez)

MANILA, Philippines (AP) — In a profanity-laced video, Grammy award-winning singer Chris Brown vented his frustration Thursday at being stuck in the Philippines for a second day after running afoul of a politically powerful religious group that filed a fraud complaint against him for a cancelled concert.

Brown was still in the country Thursday evening and had not applied for the emigration clearance he needs to leave Manila, Immigration Bureau spokeswoman Elaine Tan said in a text message to the AP.

The 26-year-old R&B singer performed at a packed concert in Manila on Tuesday but has been prevented from leaving since then.

In videos posted on Instagram, Brown clowns around, asking, “Can somebody please tell me what the (expletive) is going on?”

“I don’t know, I’m reading headlines after headlines, what the (expletive)!” he added, smiling as his companions laugh in the background while sprawled on sofas.

In another video, Brown says when he gets to customs, he will say he did nothing wrong. He then breaks into dance as people laugh.

A new video posted around midnight showed Brown kneeling on the same patterned carpet as before and pleading, “Please, please, let us leave, please,” then doing a back flip. The clip’s caption seemed to be a mock appeal to President Barack Obama.

The dispute traces back to last New Year’s Eve when Brown canceled a concert at the 55,000-seat Philippine Arena north of Manila, which is operated by a corporation owned by the politically influential Iglesia ni Cristo religious group.

The 101-year-old group is believed to have more than a million members both in the Philippines and abroad and is known to vote as a bloc in a nation where politicians often seek endorsements from church leaders.

The organizers said they were told at that time by Brown’s representative that the singer lost his passport and could not make it to the concert.

In a complaint, the Maligaya Development Corp. says Brown and his Canadian promoter, John Michael Pio Roda, backed out of the concert after they were paid in full for a $1 million contract.

MDC promoted the concert and sold tickets based on the guarantee that Brown would perform, the complaint alleged.

The religious group filed a formal complaint with a prosecutor at the Department of Justice, a preliminary step before the filing of charges in court.

Brown was being delayed while immigration officials consulted with the Justice Department about the case, Tan said.

A concert scheduled in Hong Kong for Wednesday was rescheduled to Thursday. A club manager who did not want to be named said late Thursday evening that the concert was being rescheduled again but the date was uncertain until they heard back from Brown’s representatives.

Another concert, scheduled for Saturday in Jakarta, Indonesia, was cancelled due to safety concerns, according to Brown’s Twitter account.

An Indonesian promoter, Trilogy Live, said it looked forward to having Brown come to Jakarta later and that tickets would be refunded.

Another promoter, E-Motion Entertainment, told reporters that one reason for the cancelation was the recent unrest in Tolikara district of Papua province.

Last week, a mob attacked Muslims marking the end of Ramadan and a mosque and several Muslim-owned stores went up in flames, allegedly after a meeting of Christian leaders was disrupted by the volume of the mosque’s loudspeakers. Soldiers and police stopped the angry mob, wounding 12 people with warning shots.

Papua is Indonesia’s easternmost province, far from the capital, but the violence angered many Muslims. Security was the main concern of Brown’s management, said Rangga Ibiza from E-Motion Entertainment. “No matter how small the security issue is …, it would influence their decision to hold the concert.”