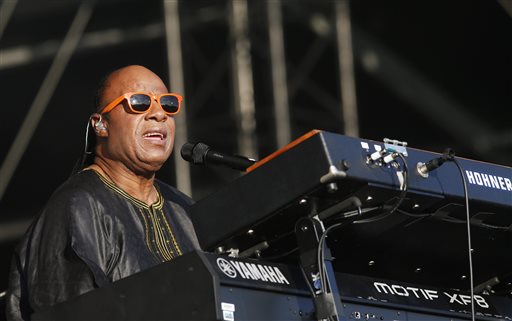 In this June 29, 2014 file photo, US singer Stevie Wonder performs at the Calling festival, in London. Wonder said the mayor of Ferguson, Mo., isnt seeing the full picture a month after an unarmed black teenager was killed by a white police officer. I dont know if the mayor has blinders on, Wonder said in an interview Wednesday, Sept. 10, 2014. (Photo by Jim Ross/Invision/AP)

LOS ANGELES (AP) — Stevie Wonder said the mayor of Ferguson, Missouri, isn’t seeing the full picture a month after an unarmed black 18-year-old was killed by a white police officer.

“I don’t know if the mayor has blinders on,” Wonder said in an interview Wednesday. “But to say that he didn’t know that there was a racial or cultural problem in the city is unfortunate.”

Wonder said he approved of how President Barack Obama has responded to protests in the city following Michael Brown’s death last month. As the unrest drew worldwide attention, Ferguson Mayor James Knowles told reporters that there was no “racial divide” there.

Wonder spoke after announcing a fall North American tour highlighting his Grammy-winning 1976 double album “Songs in the Key of Life.”

The concerts will include performances of new songs culled from the 40 to 50 tunes Wonder wrote for an upcoming album, he said in the interview. He hopes to begin releasing singles from the album, titled “Through the Eyes of Wonder,” in February.

Wonder said his new music was partly inspired by monitoring world news, from clashes in the Middle East to cultural differences in the U.S.

“Obviously the good, the bad and the ugly, I’ve seen it all. I check out all of it,” he said. “I am always challenged (by) anything that’s negative to write something like … how can we take it from that wrong place to getting it back to the right place?”

“Unfortunately we’re living in a time of disposable love and we’ve got to get it from that place to really valuing life, valuing love and valuing each other.”

Wonder’s tour is set to begin Nov. 6 in New York City and continue through 10 more cities, ending in Oakland, California, in December.