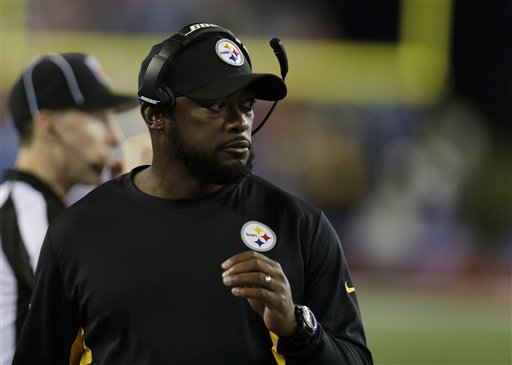 Pittsburgh Steelers head coach Mike Tomlin watches from the sideline in the first half of an NFL football game against the New England Patriots, Thursday, Sept. 10, 2015, in Foxborough, Mass. (AP Photo/Charles Krupa)

FOXBOROUGH, Mass. (AP) — The Pittsburgh Steelers say they won’t complain to the NFL office about the headset failures in the season opener against the New England Patriots.

Steelers coach Mike Tomlin said after the 28-21 loss to the Patriots that communication problems are “always the case” when playing in New England. But on Friday, the Steelers said they don’t plan to file a formal complaint.

The Patriots organization has twice been penalized by the league for taking liberties with the rules, once for illegally videotaping opponents signals and more recently for providing improperly inflated game balls for the AFC title game against Indianapolis in January. The incidents have fed suspicions around the league that there is a nefarious explanation any time something goes wrong in New England.

But Patriots coach Bill Belichick said on Friday that “it’s just not right” that his team is repeatedly being accused of cheating.

Belichick said in a conference call with reporters that his teams have worked hard to win a lot of games, including four Super Bowls. And he thinks it’s a “sad commentary and it’s gone to a pretty low level” that people are wondering if they won them fairly.

Belichick and the team were fined $750,000 and docked a first-round draft pick for illegally videotaping coaching signals in the scandal that came to be known as “Spygate.” Then the team was fined $1 million and docked two draft picks in the latest cheating investigation, this one into whether the Patriots illegally deflated footballs in the AFC title game.