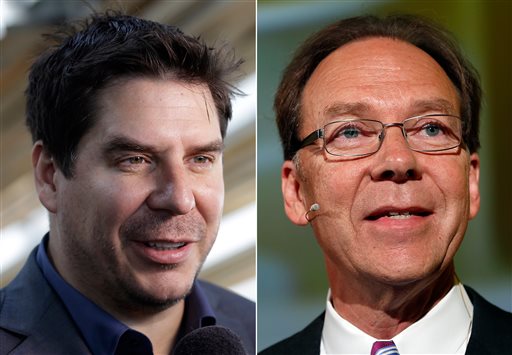 This combination made from file photos shows Brightstar CEO Marcelo Claure, left, and longtime Sprint CEO Dan Hesse. Sprint on Wednesday, Aug. 6, 2014 said it is replacing Hesse with Claure on the heels of a report that it is dropping its bid for rival wireless carrier T-Mobile. Sprint says the 43-year-old Claure will replace Hesse on Monday, Aug. 11, 2014. (AP Photo)

NEW YORK (AP) — Sprint’s new owner is replacing its longtime CEO with a Bolivian billionaire and entrepreneur after dropping its bid for rival wireless carrier T-Mobile US.

Claure, 43, had been CEO of Brightstar Corp., which is part of Softbank Corp. of Japan. Softbank bought 70 percent of Sprint last year.

Sprint shares fell 19 percent Wednesday after its chairman and incoming CEO talked about adopting aggressive tactics to compete with AT&T and Verizon, likely including price cuts.

The Wall Street Journal said Tuesday that Sprint decided not to pursue the merger of the No. 3 and No. 4 U.S. carriers. The paper cited unnamed people familiar with the matter. The merger would have faced tough opposition from U.S. regulators who want to preserve competition among wireless carriers, and Wall Street analysts saw little chance of the deal being consummated.

In a statement Wednesday, the CEO of Softbank and chairman of Sprint said the company’s focus had shifted away from acquisitions, though he didn’t address the Sprint deal specifically.

“While we continue to believe industry consolidation will enhance competitiveness and benefit customers, our focus moving forward will be on making Sprint the most successful carrier,” Masayoshi Son said.

Part of Son’s desire to buy T-Mobile probably lay in his desire to bring T-Mobile CEO John Legere into his team. The foul-mouthed, jeans-wearing Legere has upended long-standing industry practices and brought customers streaming back to T-Mobile, though he has no profits to show for his efforts.

“Son is looking for a more entrepreneurial spirit … he’s looking for someone willing to break the rules,” Entner said.

In his own statement, Claure suggested Sprint would be taking on Verizon and AT&T through price cuts.

“We will focus on becoming extremely cost efficient and competing aggressively in the marketplace. While consolidating makes sense in the long-term, for now, we will focus on growing and repositioning Sprint,” he said.

Claure, the son of a Bolivian diplomat who moved to the U.S. in the 1990s, built Brightstar into the world’s largest distributor of cellphones, initially by exporting phones to Latin America. He then convinced U.S. cellphone carriers that they’re better off outsourcing that side of the business.

Softbank will be acquiring his stake in the company, it said.

“Four national wireless providers is good for American consumers. Sprint now has an opportunity to focus their efforts on robust competition,” he said in a statement.

Hesse joined Overland Park, Kansas-based Sprint as CEO in 2007. It has lost money every year since then because of stiff competition and the disastrous legacy of the 2005 Nextel acquisition, but Hesse has been credited with improving the carrier’s customer service and shepherding it back to the cusp of profitability. The soft-spoken Hesse was also the company’s chief pitchman, appearing in its TV commercials for several years.

Recently, however, Sprint has become bogged down in a network upgrade. Its wireless broadband capabilities are well behind of competitors, and it has to invest massively to catch up. That’s causing continuing losses, likely contributing to Hesse’s replacement, according to analyst Greg Miller of Canaccord Genuity.

In a farewell message to Sprint employees, Hesse said the most difficult part of the network upgrade is now completed, and Sprint is “about ready to begin growing again.”

“A ‘controlled entity’ like Sprint can be most effective when the majority owner and the CEO are fully aligned and are great partners. Marcelo and Masa enjoy an exceptional relationship which has grown out of mutual respect between two very successful entrepreneurs,” Hesse said.

T-Mobile US shares dropped $2.85, or 8.4 percent, to $31.06, erasing several days of gains, as the prospect of a Sprint deal faded. Sprint was reportedly offering $40 per share.

Last week, T-Mobile received an unexpected offer from Iliad SA, an upstart French telecommunications company, offered $33 per share for 57 percent of T-Mobile. However, Iliad is much smaller than T-Mobile, and analysts doubted the deal would be taken seriously by T-Mobile.

Claure’s tough talk on pricing and the prospect of a continued battle among four national wireless carriers brought down Verizon’s stock by 1 percent and AT&T’s by 1.4 percent.