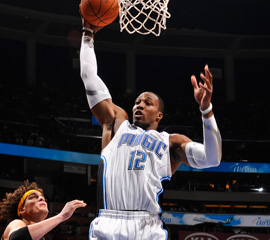 A four-team trade that would send Dwight Howard to the Los Angeles Lakers is complete, multiple sources told ESPN on Thursday night.

A source with direct knowledge of the talks told ESPN.com’s Marc Stein the Lakers will receive Howard, the Denver Nuggets will acquire Andre Iguodala, the 76ers will receive Andrew Bynum and Jason Richardson, and the Magic will get Arron Afflalo, Al Harrington, Nikola Vucevic and one protected future first-round pick from each of the three teams.

The Lakers also will acquire Earl Clark and Chris Duhon, a source told ESPN The Magazine’s Chris Broussard. Draft picks the Magic will receive are Nuggets (2014), 76ers (2015) and Lakers (2017).

In addition, the Magic will be getting other pieces, including 76ers No. 1 draft pick Moe Harkless, a source told Stein.

With the addition of Steve Nash, the projected starting lineup is Nash, Kobe Bryant, Ron Artest, Pau Gasol and Howard.