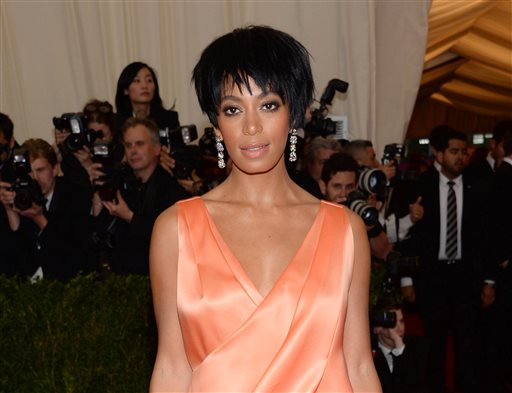 This May 5, 2014 file photo shows Solange Knowles, sister of Beyonce Knowles, at The Metropolitan Museum of Art’s Costume Institute benefit gala celebrating “Charles James: Beyond Fashion” in New York. Beyonce, Jay Z and Solange say they have worked through and are moving on since a video leaked this week of Solange attacking Jay Z in an elevator inside the Standard Hotel after the May 5, gala. (Photo by Evan Agostini/Invision/AP)

(BBC News) – Solange Knowles has talked for the first time about an argument with Jay Z following the Met Gala in May.

Talking to Lucky Magazine, she said: “What’s important is that my family and I are all good.”

In May, Solange, her sister Beyonce and Jay Z said they’d “moved forward as a united family” after the incident which was leaked by celebrity site TMZ.

It’s still not clear what the argument, which Solange calls “that thing”, was about.