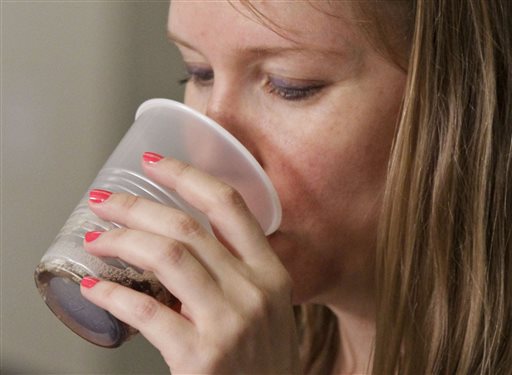 In this June 27, 2012 file photo, blog writer Stephanie Klose, sips beverage as she participates in a soda taste test in New York. Coke, Pepsi and Dr Pepper on Tuesday, Sept. 23, 2014 said they’ll work to reduce the calories Americans get from beverages by 20 percent over the next decade by more aggressively marketing smaller sizes, bottled water and diet drinks. (AP Photo/Bebeto Matthews, File)

The announcement was made at the Clinton Global Initiative in New York City and comes as the country’s three biggest soda makers face pressure over the role of sugary drinks in fueling obesity rates.

In many ways, the commitment follows the way customers’ tastes are already changing: People have been moving away from soda on their own for several years. In response, Coca-Cola Co. and PepsiCo Inc. have been pushing smaller cans and bottles, which tend to be more profitable and are positioned as a way to control portions. They’ve also rolled out flavored versions of Dasani and Aquafina, respectively, as demand for bottled water has grown.

John Sicher, publisher of the industry tracker Beverage Digest, said the commitment announced Tuesday appears to be a response to the growth challenges the companies are facing, in part because of health concerns. Between 2000 and 2013, Beverage Digest estimates the calories people got from drinks fell by 12 percent.

Susan Neely, president of the American Beverage Association, said the commitment with the Alliance for a Healthier Generation is intended to take such trends “to an ambitious new level.” She said the companies will focus their efforts on communities where there has traditionally been less interest in lower-calorie drinks.

On stage at the event, former President Bill Clinton noted that drinks can make up a greater share of daily calorie intake for lower-income people.

The initiative could also be a way for the industry to get out in front of campaigns for more aggressive tactics to fight obesity. The American Beverage Association has spent millions of dollars campaigning against taxes and other measures intended to reduce consumption of sugary drinks. In the San Francisco Bay Area, for instance, it is now working to defeat a proposed tax set to go before voters in November.

Instead of such government measures, the beverage association has touted the need for greater awareness about choices and the need to balance calorie intake with physical activity. That will be one component of its new push, with an ad campaign called “Mixify” aimed at teens set to start airing nationally on TV this week.

The association also noted companies will provide calorie counts on places such as vending machines. A federal regulation is expected to soon require such disclosures, but Neely said beverage makers will go farther by providing some sort of additional “nudge” for people to make better choices.

The association said it will hire an independent evaluator to track its progress.

It isn’t the first time the industry has partnered with the Alliance for a Healthier Generation. In 2006, the American Beverage Association also announced an agreement with the organization to remove full-calorie soft drinks from schools. That came after the threat of legal action by the Center for Science in the Public Interest, said Jeff Cronin, a spokesman for the nutrition advocacy group based in Washington, D.C.

Michael Jacobson, executive director of CSPI, said the announcement shows “the industry is seeing the writing on the wall” and that it’s a way for the industry to burnish its reputation.