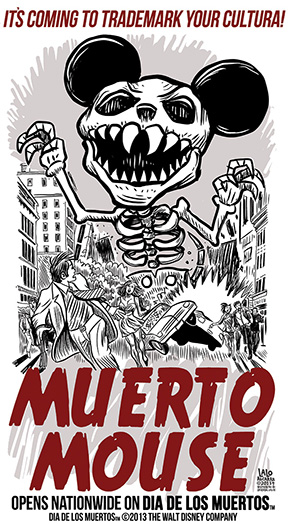 Disney said it was no longer seeking a “Dia de los Muertos” trademark request because the film’s name will change before its release.
(laloalcaraz.com)

ALBUQUERQUE, N.M. — When Lalo Alcaraz learned this week that Disney was seeking to trademark “Dia de los Muertos,” the name of the traditional “Day of the Dead” celebrated by millions in Mexico and the U.S., the cartoonist had an idea.

The trademark was for an animated movie by Disney and Pixar Animation Studios Inc. that is inspired by the holiday.

The Los Angeles-based humorist created a movie poster that quickly went viral of a skeletal Godzilla-sized Mickey Mouse, with the words: “It’s coming to trademark your cultura (culture).”

Read more of this story at The Sacramento Bee.