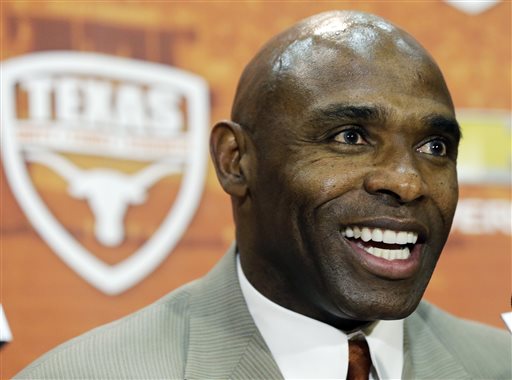 Charlie Strong answers questions during an NCAA college football news conference where he was introduced as the new Texas football coach, Monday, Jan. 6, 2014, in Austin, Texas. Strong acknowledged the historical significance of being the school’s first African-American head coach of a men’s sport. He takes over for Mack Brown, who stepped down last month after 16 seasons. (AP Photo/Eric Gay)

(Dallas Morning News) – Good news, Texas Longhorns fans: Charlie Strong spoke at the Big 12 media circus Tuesday and not once did he say anything that might have set off any alarms in the White House. He was prepared, thoughtful, comfortable. Even his players think he’s come a long way. He’s no Mack Brown behind a microphone, but, hey, who is?

Some of us this week sort of missed the way Mack could fill up a notebook, although I can’t speak for everyone.

For instance: A reporter asked Bob Stoops if media days were different without Mack.

Occasionally when interviewing Bob Stoops, you get an idea of life as his dog.