Shades of Pigpen: We Travel with Our Own Germs
Advertisement 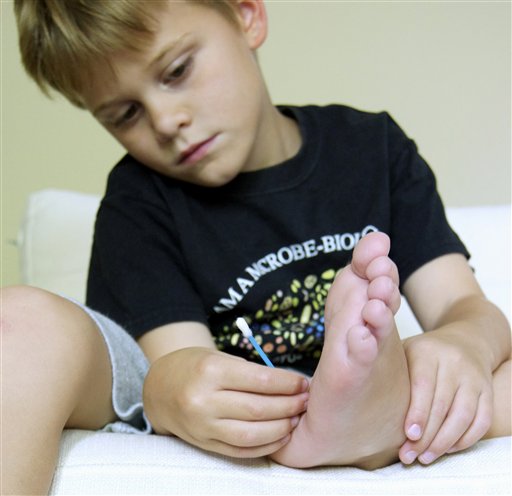 In this undated photo provided by the Gilbert family shows Dylan Gilbert, 7, of Naperville, Ill., demonstrating how he helped collect samples of bacteria from his foot during a 2012 study. Dylans father, microbiologist Jack Gilbert of Argonne National Laboratory, led the Home Microbiome Project that analyzed bacteria in seven homes around the country, including his own, and found the microbes that normally live in peoples bodies quickly move onto their doorknobs, countertops and floors. (AP Photo/Gilbert Family)

WASHINGTON (AP) — Sorry, clean freaks. No matter how well you scrub your home, it’s covered in bacteria from your own body. And if you pack up and move, new research shows, you’ll rapidly transfer your unique microbial fingerprint to the doorknobs, countertops and floors in your new house, too.

In fact, researchers who studied seven families in Illinois, Washington and California could easily match up who lived where using their microscopic roommates, almost like CSI for germs.

Thursday’s study is part of an effort to understand how the trillions of mostly beneficial bacteria that live in and on our bodies — what’s called the human microbiome — interact with bugs in the environment to affect our health.

“We have so little information about where the microbes come from that shape our microbiome, whether it’s for health or disease,” said microbiologist Jack Gilbert of the Argonne National Laboratory and University of Chicago.

Where do people spend most of their time? “It’s the indoor environment. The best place to look at that was the home,” said Gilbert, who led the Home Microbiome Project and included his own family.

Right at birth, babies start picking up microbes on the skin, in the nose, in the gut that eventually make up living communities that will share their bodies throughout life. Many of these bugs play critical roles in digestion, the immune system and other health-inducing factors. Others may make it easier to gain weight, or influence disease. What shapes the balance of good bugs and bad is a huge scientific question.

Hospital studies make clear that someone who already is sick can catch a new infection from pathogenic bacteria left behind by a previous patient.

In contrast, the new study examines healthy people, and it marks an important step: Beginning to show what’s normal in a regular home, said Dr. Lisa Helbling Chadwick of the National Institutes of Health. That’s a key question before scientists can explore how to possibly create healthier homes.

“You have to think about the microbiome of your home as part of your home’s immune system,” said Chadwick, of NIH’s National Institute of Environmental Health Sciences, who wasn’t involved with Gilbert’s project. “Instead of relying on killing bugs to stop the spread of infection, maybe we need to cultivate better bugs.”

For the study, Gilbert recruited seven households that included 15 adults, three children, three dogs and a cat. For six weeks, participants collected samples of the microscopic bugs living on and around them by swabbing the hands, feet, noses and paws of everyone in the household, plus doorknobs, light switches, floors and countertops.

Back in the laboratory, Gilbert’s team identified the bugs by their DNA, and they reported Thursday in the journal Science that people substantially affect the microbial communities in their homes.

Different homes harbored markedly different bacterial populations, but they closely matched the microbiomes of their residents.

The big surprise: How quickly the bugs settled in. Like Pigpen’s trailing cloud of dust in the Peanuts comic strip, when three families moved — one of them from a hotel room to a house — it took about a day for the microbes in their new homes to closely resemble those in the old ones.

“The speed at which that colonization happens was quite remarkable,” Gilbert said.

Sure, there are some leftover bacteria from previous occupants, he said. But many bacteria die or go dormant after a while on a hard, air-conditioned surface. At the same time, the oil in your skin readily transfers your own bacteria to surfaces. That’s not counting all those tiny flakes of dead skin that people constantly shed, microbe-filled dust that probably just blankets the bugs that were there first, Gilbert noted.

“It changed my perspective almost on hotel rooms,” he added with a laugh.

In another home, someone went on a three-day trip, and that person’s contribution to the usual household microbe mix dropped noticeably.

And dogs moved the bacteria from surface to surface even more rapidly.

As for potentially dangerous bacteria, in one house, the scientists tracked a germ called Enterobacter from one person’s hands to the kitchen counter and then to another person’s hands. No one got sick, possibly because the residents were healthy and hadn’t recently used antibiotics, Gilbert said.

It will take more research to figure out where the different bugs that people and their pets bring into their homes originally come from. And Gilbert pointed to the study’s other implication: Maybe people should make sure they’re regularly getting outside to expose themselves, and their immune systems, to a wider variety of bugs.