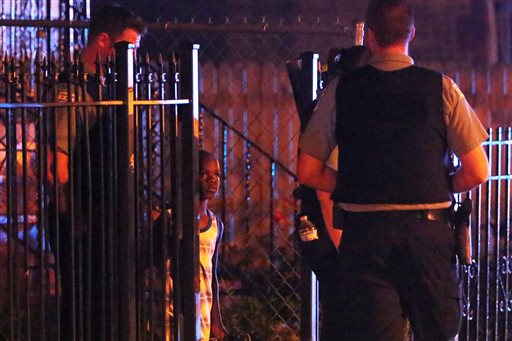 A young boy watches as police investigate the scene where a 7-year-old boy was killed and a 26-year-old woman was injured in a shooting in the the 1100 block of North Harding Avenue during the early morning hours Sunday, July 5, 2015 in the Humboldt Park neighborhood of Chicago. (Anthony Souffle/Chicago Tribune via AP)

(USA Today) – After seeing years of decline in violent crime, several major American cities experienced a dramatic surge in homicides during the first half of this year.

Milwaukee, which had one of its lowest annual homicide totals in city history last year, has recorded 84 murders so far this year, more than double the 41 it tallied at the same point last year.

Milwaukee Police Chief Edward Flynn said the mounting homicide toll in his city of 600,000 is being driven by Wisconsin’s “absurdly weak” gun laws (carrying a concealed weapon without a state-issued concealed carry is a misdemeanor in the Badger State), a subculture within the city that affirms the use of deadly violence to achieve status and growing distrust of police in some parts of the city.

Milwaukee is not alone.

Baltimore, New Orleans and St. Louis have also seen the number of murders jump 33% or more in 2015. Meanwhile, Chicago, the nation’s third-largest city, has seen the homicide toll climb by 19% and the number of shooting incidents increase in the city by 21% during the first half of the year.