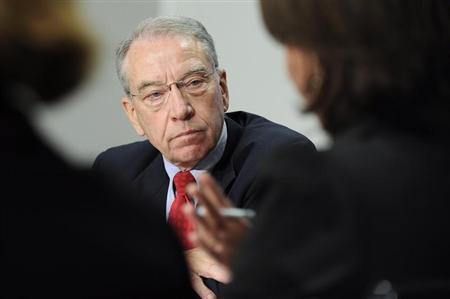 US Senator Charles Grassley (R-IA) listens to a question during the 2009 Reuters Washington Summit in Washington, October 19, 2009. (Credit: Reuters/Jonathan Ernst)

A landmark immigration bill survived a major challenge in the Senate on Thursday when its bipartisan “Gang of Eight” sponsors beat back an amendment that would have delayed a pathway to citizenship for 11 million illegal residents.

The proposal by Iowa Republican Charles Grassley would have prohibited a first step toward granting them legal status until the U.S. Department of Homeland Security “has maintained effective control” of the entire U.S.-Mexico border – 1,969 miles – for a period of six months.

Critics charged it could take years to achieve such a nebulous goal, undermining a centerpiece of the effort to overhaul the immigration system.

The Senate bill would allow those living in the United States illegally to apply for legal status within six months of enactment.

The Jury is Out on Obama’s Fight to Confirm Judges