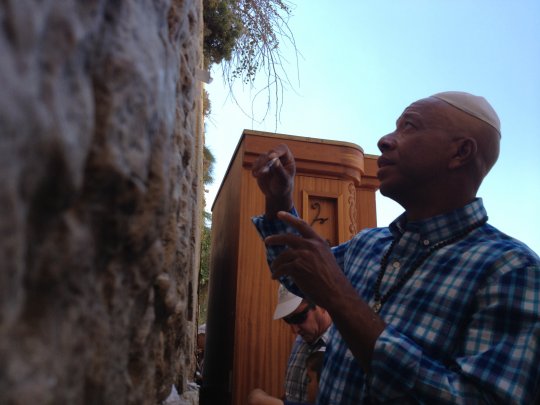 During Russell Simmons’ recent visit to Israel, he realized the longstanding Palestinian-Israeli conflict looked a lot like something closer to home: the east verses west coast hip hop clash of the early 90s. Or any other rap rivalry for that matter.

Simmons said that Muslims and Jews “have the same aspirations and goals that are much greater than the things they call differences,” reports Eurweb.

Promoting interfaith trust, the hip hop impresario and yoga enthusiast posits that a semblance of understanding can be reached between Muslims and Jews through dialogue. Israeli President Shimon Peres invited the multimillionaire to the country.

Simmons took the comparisons further than the Anti-Defamation League was comfortable with during his visit however. He has since drawn the ire of Abraham H. Foxman, national director of the Anti-Defamation League, reports the Times of Israel. At the Facing Tomorrow Conference in Jerusalem, Simmons compared the way Foxman “alienated blacks” in the same way Louis Farrakhan has antagonized the Jewish community.

“We’ve heard this kind of doublespeak before, so it is not surprising to hear Russell Simmons once again making excuses for the polarizing anti-Semitic and racist speech of Louis Farrakhan. He’s been doing this for years,” said Foxman. “What’s surprising is that Simmons did it in Jerusalem.”

Read on to see Simmons’ response on his entertainment news website, Global Grind, and his call for a truce with Foxman.