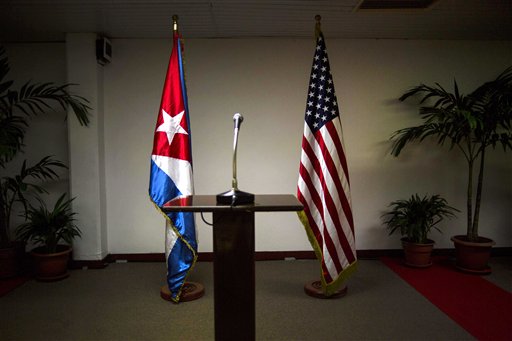 In this Jan. 22, 2015 file photo, a Cuban and U.S. flag stand before the start of a press conference on the sidelines of talks between the two nations in Havana, Cuba. (AP Photo/Ramon Espinosa, File)

HAVANA (Xinhua) – Cuba and the United States have jointly caught worldwide attention once again after announcing the resumption of diplomatic relations and the opening of embassies on each other’s soil after 54 years of enmity.

The historic decision which was contained in letters sent Wednesday to each other by Presidents Raul Castro and Barack Obama, was disclosed six months after the two leaders surprised the world with their determination to begin a process to renew ties.

Diplomatic relations between the two neighboring countries were broken off unilaterally by the United States on January 3, 1961, a few weeks before launching the invasion on Playa Giron (Bay of Pigs) in Cuba’s southwest Matanzas province.

Since then, restoring ties on either side of the Straits of Florida appeared to be a pipe dream. Now, it has become a reality.

Haiti Will Not Cooperate with Denationalization in Dominican Republic