Haiti Will Not Cooperate with Denationalization in Dominican Republic
Advertisement 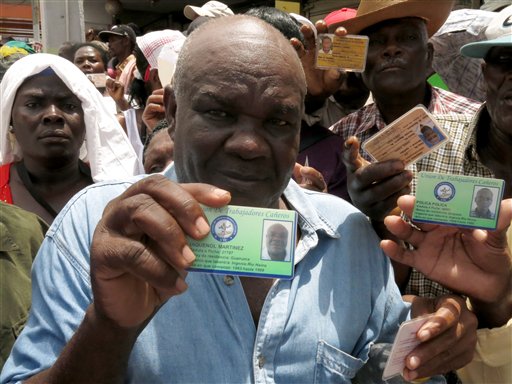 Haitian Jaquenol Martinez shows a card that proves that he has worked in the Dominican sugar cane fields since 1963, while trying to apply for a temporary resident permit, in Santo Domingo, Dominican Republic, Monday, June 15, 2015. (AP Photo/Ezequiel Abiu Lopez)

(Haiti Sentinel) – The Haitian government will not cooperate with the Dominican Republic on receiving denationalized persons stated Foreign Affairs and Defense Minister Lener Renauld on Tuesday following a meeting with members of the diplomatic corps.

“Haiti is prepared to receive its nationals illegally in the Dominican Republic, but not the Dominicans of Haitian descent…”- Lener Renauld

At the site of the meeting, El Rancho Hotel, Minister Renauld did reaffirm that Haiti was prepared to receive its nationals illegally in the Dominican Republic. The change in position focuses on those who were denationalized and would have been deported for not being accepted into the D.R. National Regularization Plan.

The Dominican Republic’s retroactive stripping of citizens of Dominicans of Haitian or other descent is widely regarded as a violation of human rights. From human rights organizations to the U.S. State Department, the measure has been regarded as discriminatory and not in keeping with the Universal Declaration of Human Rights.