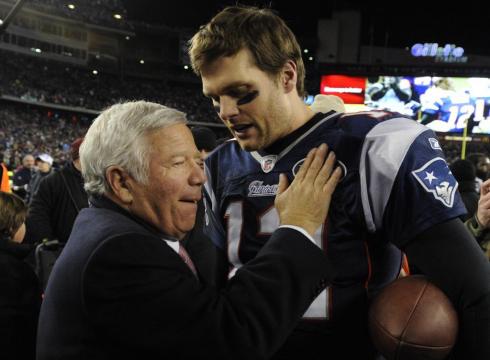 Patriots owner Robert Kraft has had an offseason, hasn’t he? From Aaron Hernandez arrest to Tom Brady‘s near-injury to Tim Tebow’s release … his franchise has been in the news. Kraft appeared on CBS News’ CBS This Morning Tuesday to discuss the recent concussion lawsuit settlement.

And while he was there, Charlie Rose also asked the Patriots owner about Tebow’s release — Kraft says he “very much wanted” Tebow to make the team.

“I love Tim Tebow and I very much wanted him on the team,” Kraft told Rose on CBS This Morning. “If you look at four of the last five years, we’ve only carried two quarterbacks. And when a cut-down time comes, you need those last three or four positions for depth, and we happen to have, I think, the finest quarterback in the history of the game, and he’s not going off the field except by injury. We have a great second-string quarterback. When he came in he came in as the third quarterback and we were all rooting for him.

“And life takes funny turns, so no one knows what’s going to happen in the future, but whatever he does I know he’s going to be a great success off the field and I’m rooting for him to get his opportunity on the field as well.”

Nyad Fought Off Winds, Sickness and Fatigue on Record Swim

Vince Young Tweets He Was Cut by Packers