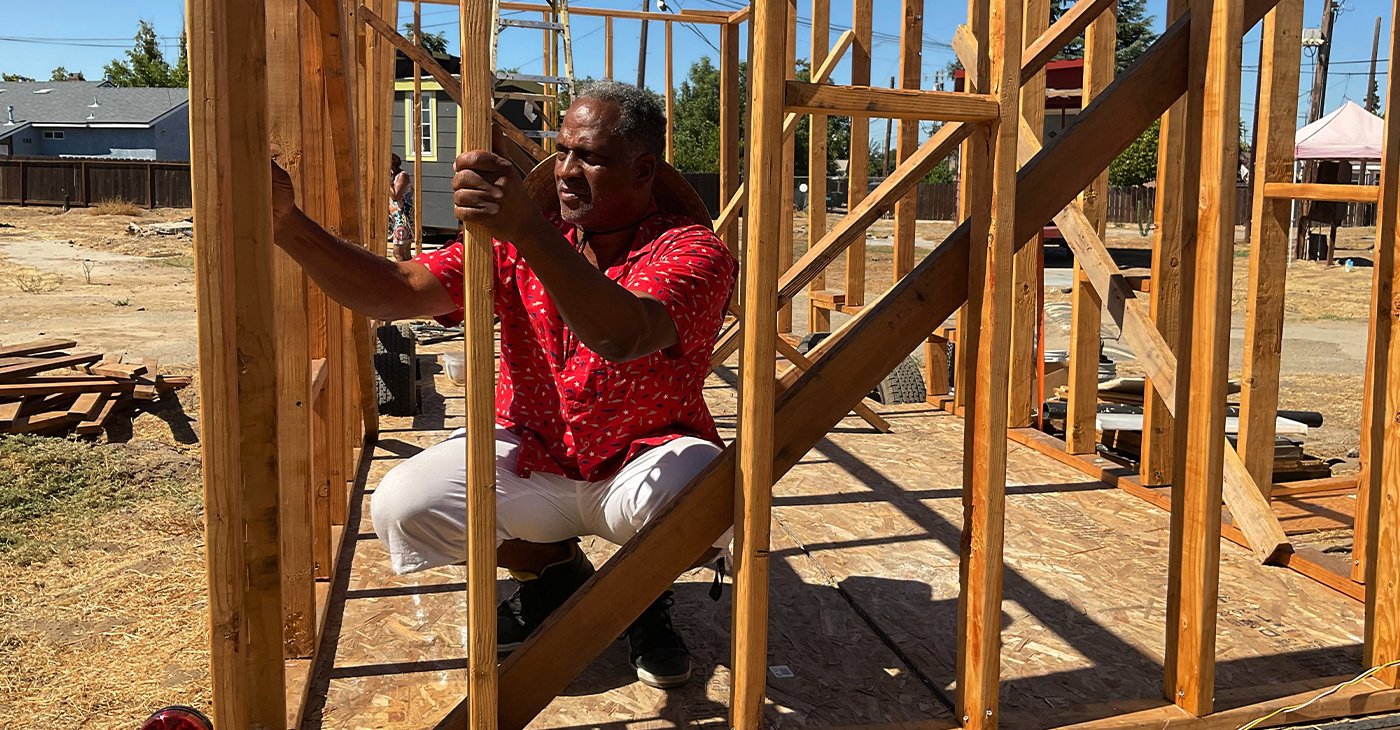 Preacher, builder says he’d rather see a sermon than hear one, any day

Part 1- Tiny Homes, a Heavy Lift, to Lighten the Load

Rev. Ken Lackey, like Jesus, his biblical idol who was trained as a child to be a carpenter, also sees his mission, to be the second-coming fulfillment of Jesus’ work here in Oakland and other Bay Area cities as a carpenter to build homes for the lost, the least, the lonely, the hungry and those that have been left behind.

He, too, began his work and calling as a teenage construction worker to do the heavy-lifting task of building homes.

In fact, he’s been accustomed to heavy lifting since his days as a U.S. Olympic weightlifting hopeful with the support of Muhammad Ali and the Hyatt Corporation.

Even though he has built more than 150 tiny homes from his own earnings, his ministry and several individual donors, he now wants to do more.

“With a serious effort of prayerful togetherness, we can help end homelessness for the vast majority of those living in these encampments on our sidewalks, under freeways and other abandoned locations,” he confidently proclaims.

He has asked the Post News Group to become his media partner to help recruit volunteers and to reach out to more than 400 houses of worship and the other hundreds of neighborhoods and community-based organizations. His plan of establishing an extensive network of resource means stems back to the days when he first started laying out his strategy with the late David Glover, the former Director of OCCUR (Oakland Citizens Committee for Urban Renewal).

While the Post was interviewing him and one of his partners, Dr. Maritony Yamot, about a recent donation of 200 acres of land in Manteca, California, he also received a request to accept the use of property in East Oakland to build tiny homes.

His basic single-story models are 8×20 feet with kitchen, bathroom and electrical facilities. They are built with wheels which makes them mobile to allow them to be moved and placed on gravel-covered lots with electrical, plumbing and sewage connections. The homes, once located, will be jacked and leveled to allow for a skirt-like border around the base. All of this for approximately $25,000.

“I plan to hire and train the formerly incarcerated and those homeless persons who want to work to earn,” he said, and that one of his many adaptable models of tiny homes can be built in less than 30 days. He challenged the Oakland Post to utilize a network of OCCUR, Pastors of Oakland, Oakland Chaplaincy, Friendship Christian Center, AASEG, The Oakland Private Industry Council, Holy Names University, The Formerly Incarcerated Giving Back G.I.V.E and the Market Street SDA church to join with him to build 200 homes by Christmas. “We want partners who want to ‘just serve others.’”

“We need to recruit volunteers and community-based groups; choose people who want to win and overcome their situations. I have used my physical and spiritual eyes to help me navigate. Now we will need to involve some of them in EBT (Emotional Brain Training) and other educational classes and services to guide them through our five-year program, which, if they observe the rules and protocols of respect, they can choose to sell their home at the end of the five-year program. This approach was patterned after the Delancey Street model that values work and cooperation.”

Next week Part 2 – How to build & establish entrepreneurial opportunities from these Tiny Homes Gated Communities. Lackey’s Center for the Perfect Marriage.