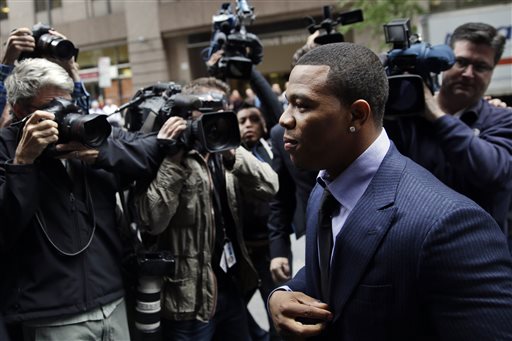 Ray Rice arrives for an appeal hearing of his indefinite suspension from the NFL, Wednesday, Nov. 5, 2014, in New York. (AP Photo/Seth Wenig)

The hearing begins nearly two months after the former Pro Bowl running back was suspended indefinitely by the NFL and released by the Baltimore Ravens.

Rice was suspended indefinitely Sept. 8 for violating the NFL’s personal conduct policy after a video of him hitting his then-fiancee was released publicly. Goodell originally had suspended the running back for two games. The incident occurred inside an elevator at an Atlantic City casino. The couple married a month later.

The league considered the video to be new evidence, giving Goodell the authority to amend Rice’s suspension. But Rice’s attorneys will argue he should not be punished twice, citing Article 46 of the collective bargaining agreement.

Jones was jointly picked by the commissioner and the players’ union to hear the appeal. It’s uncertain how long Jones will take to make a decision.

Rice is seeking immediate reinstatement, though it’s unlikely a team would sign him this season. Rice has also filed a separate wrongful termination grievance against the Ravens.

Rob Maaddi can be reached on Twitter at http://www.twitter.com/ap_robmaaddi