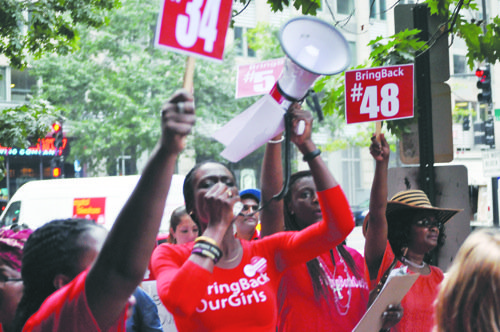 Protestors gathered outside of the Grand Hyatt Washington in Northwest on Aug. 6 demanding that Nigerian leaders act on behalf of more than 200 girls kidnapped by terrorists in April. (Courtesy of N.W. Kumah)

by D. Kevin McNeir
Special to the NNPA from The Washington Informer

Little girls should have the chance to get a quality education, frolic with friends and dream about becoming doctors, lawyers, teachers or engineers.

But in places of civil unrest, young women face more life-threatening obstacles – holding on to their innocence and not being exploited because of the whims of men.

While leaders from the Motherland painted the town during the U.S.-Africa Leaders Summit in the District a few weeks ago, a group of protesters gathered outside of the Grand Hyatt Washington in Northwest in support of several hundred schoolgirls kidnapped in early April by a terrorist organization in their homeland of Nigeria.

“I asked Nigerian President Goodluck Jonathan what he was doing to find the girls and he told me that while he was doing all he could that he didn’t want to rush in because he thought their captors might kill them,” said Rep. Frederica Wilson, who represents Miami and other parts of South Florida. “More troubling is the fact that he waited over three months before meeting with the parents of the abducted girls and still has not visited their school [Government Second School in Chibok in Borno State, Nigeria] to express his solidarity or to share his action plan in securing the safe return of the young girls.”

Wilson, who has traveled to Nigeria and met with some of the girls who managed to escape, marched with close to 60 other protesters on Wednesday, August 6 to express both outrage and disappointment that more than 200 girls remain missing and presumed forced into marriages by members of Boko Haram, an Islamic Jihadist and terrorist group based in Northeast Nigeria.

Since 2010, Boko Haram has targeted schools, killing hundreds of children under the pretense that they object to education that isn’t Islamic based. On the night of April 14 and 15, the militants broke into the school and kidnapped approximately 276 girls, 53 of whom have since escaped.

One member of a grassroots organization comprised of citizens from the African diaspora said pressure and protests should continue against Nigeria’s leaders until the girls are returned home.

“The Nigerian government claims that they know where the girls are being held which begs the question what are they doing to retrieve them,” said Omolola Adele-Oso, founding member and leader of Act4Accountability, who lives in Bowie, Maryland and partners with groups along the Eastern Seaboard on issues of social justice. “Girls all over the world are undervalued and are most affected by policies impacting access to quality education, reproductive health and the allocation of adequate resources,” said Adelo-Oso, 35.

One supporter from Olney, Maryland said he fears that the girls will eventually be forgotten.

“This incident is not a flashpoint as the abduction and violation of the security of adolescent girls and women in Africa is a long-standing tradition,” said Adom M. Cooper. “Jonathan’s decision not to negotiate has more to do with his desire not to lose his current position of power in Nigeria than it does with 276 innocent girls in danger. I think it’s cowardice on his part. Tragically, the world does not value the lives of those with dark skin,” said Cooper, 27.

An educator from Brooklyn College, CUNY, said she hopes that nations with clout will force Nigeria’s leaders to act.

“The U.S., Israel and other more powerful states than Nigeria routinely negotiate with those who abduct their citizens,” said Mojúbàolú Olúfúnké Okome, a resident of Brooklyn, New York and a professor of political science, African and women’s studies. “The U.S. promised to help locate the girls and recover them – it should live up to its promise.”

Since the kidnapping, people from across the globe, including first lady Michelle Obama, have given their support via social media hoping to influence the Nigerian government to free the girls, curb further abductions and protect other schoolchildren.

One member of the American Federation of Teachers said she participated in the protest because of her commitment to social justice.

“I understand [Jonathan’s] reluctance to negotiate with terrorists – it sets a bad precedent,” said Marjorie Brown, who lives in Falls Church, Virginia. “On the other hand this abduction was so outrageous and perpetrated on truly helpless victims and by not negotiating, as far as we know, he seems somewhat complicit in the act,” said Brown, 55.