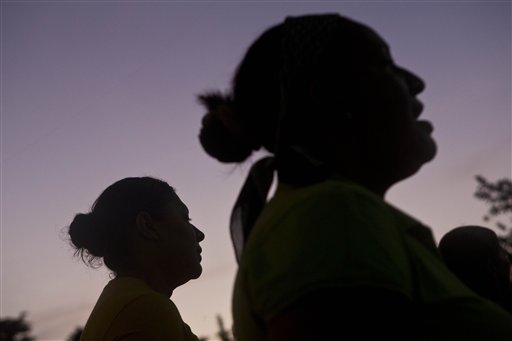 In this Saturday, July 19, 2014 photo, Elsa Ramirez, 27, left, deported from the United States with her children a day earlier, prays at a local outdoor church youth meeting for youth, in Tocoa, Honduras. (AP Photo/Esteban Felix)

If Caribbean nations and their consular representatives in New York and Miami see a surge in the number of families being deported by the U.S. especially children they shouldn’t be surprised.

That’s because the Obama Administration is moving swiftly to place entire families, including toddlers onto a fast track for deportation to their respective homelands.

It’s a change in strategy, charge immigration advocates and attorneys, which is being fueled by the steady influx of unaccompanied Central American children, some of whom are being taken to remote parts of the country, including Texas and New Mexico where their cases are being heard by immigration judges. In Texas, for instance, the Administration is adding new beds in a center in Karnes City to house more than 532 adults and children. It is doing a similar thing in Pennsylvania, albeit for much smaller numbers of immigrants.

“Our borders are not open to illegal immigrants,” warn Jeh Johnson, Secretary of the Department of Homeland Security, as he sought to explain the reasons for the fast track approach.

Before the new approach was launched recently, immigrant families were released while their deportation cases were moving slowly through the system. But Washington has changed gears expanding facilities so that centers can house more families. In New York where immigration judges are hearing hundreds of cases involving families from the English, French and Spanish-speaking Caribbean countries as well as Central America, attorneys say entire families were being moved to the top of the deportation list so their cases can be resolved expeditiously.

“It seems as if the Administration has made a determination that families, not simply adults must be deported if they are in the country illegally,” said a Caribbean consular representative who has attended hearings involving nationals of his country.

“The perception is that people come there to get deported,” insisted Laura Lichter, a former President of the American Immigration Lawyers Association who has helped to assembly a group of lawyers to work on immigrant cases in Artesia, Texas where as many as more than 600 women and children, most of them from Central America were awaiting a hearing while being held in a center.

The strategy is in line with President Barack Obama’s vow to fast-track deportations to Central American countries. More than 50,000 youths from Honduras, Guatemala and El Salvador have come across the U.S. borders in Texas, Arizona and California, fleeing gang violence at home.

The policy has stirred the anger of Democratic Congressman Luis Gutierrez, a prominent voice in the immigration movement who has strongly criticized the fast track policy.

“We should not take short-cuts and circumvent due process at this critical time when children are fleeing violence and asking for our help,” the lawmaker said.

Although Vice President Joseph Biden has stopped far short of urging the Administration to soften its fast track deportation policy, he did say “there’s an awful lot of kids who need help.”

U.S.-Africa Relations: Beyond the Summit