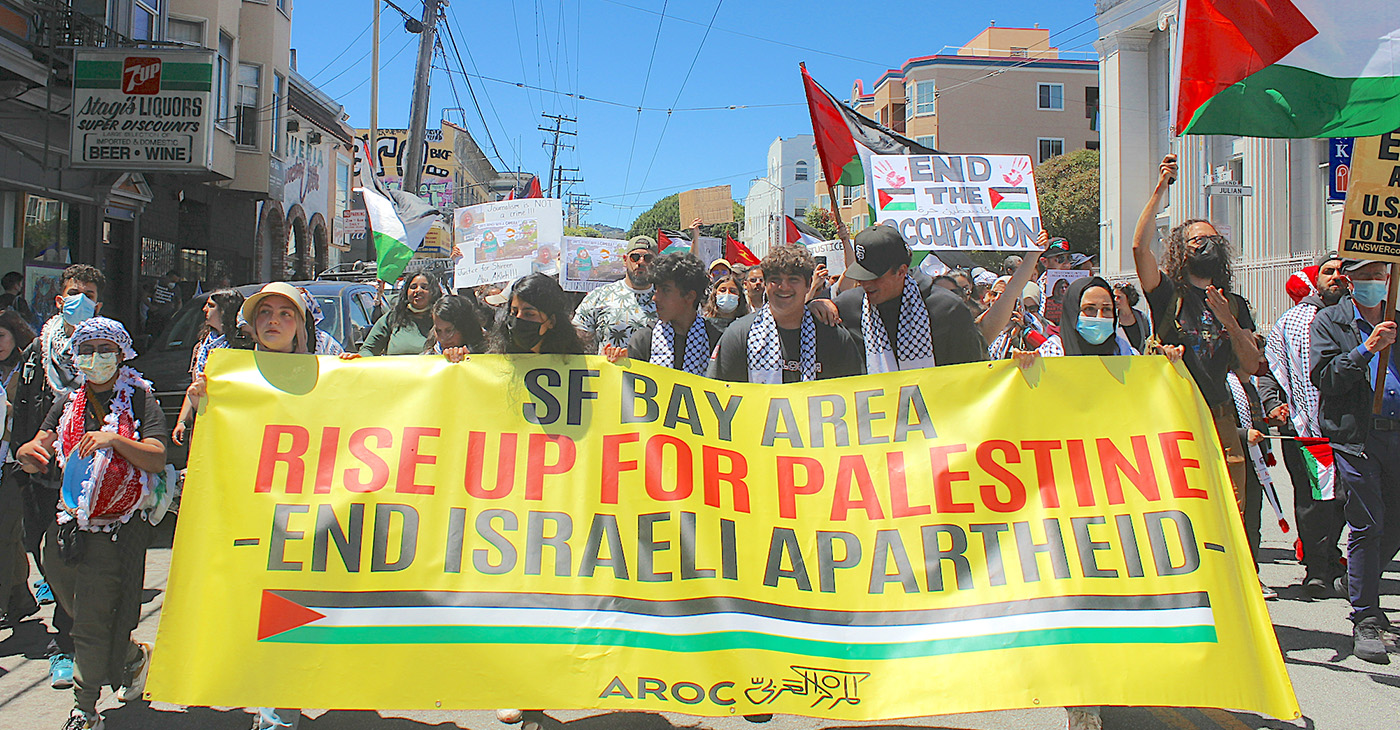 Starting at noon on May 14, over 500 people rallied and marched in San Francisco’s Mission District to protest the killing of Palestinian American journalist Shireen Abu Akleh and 74 years of Israeli occupation of Palestine.

“If you were a Palestinian anywhere around the world who watched the news since the late ’90s, you grew up with Shireen Abu Akleh,” said Sabreen Imtair, a San Francisco State University student and Arab Resource and Organizing Center (AROC) member in an interview during the protest. “A lot of people are saying they lost a household member. We are really feeling her loss right now.”

Abu Akleh, who had worked for the Al Jazeera news network for 25 years as one of the most prominent journalists reporting in Israeli-occupied Palestinian territories, died of a bullet wound on May 11 while covering an Israeli army raid in the Jenin refugee camp in the West Bank.

She was wearing a blue vest with large white letters stating “PRESS.” During Abu Akleh’s massive funeral on May 13, Israeli police beat people carrying her casket.

“We’re not even able to bury our dead in peace,” said AROC organizer Sharif Zakout during a speech at the San Francisco protest. “It’s disgusting.”

AROC, Palestinian Action Network, Palestinian Youth Movement, and Jewish Voice For Peace organized the San Francisco demonstration. It was one of at least 60 such actions occurring between May 14-16 around the world to remember Abu Akleh and to mark Nakba Day, an annual commemoration for Palestinians that began after 1948, when the British government formally stopped recognizing the state of Palestine and recognized Israel in its place.

This sparked the Arab-Israeli war when Zionist military forces expelled over 750,000 Palestinians and captured 78% of Palestine’s land.

In an interview at the protest, Lisa Rofel, a member of Jewish Voice For Peace, spoke out against Israeli occupation and explained why the Jewish group was present.

“We’re here because we strongly support the Palestinian struggle for liberation from Israeli occupation,” Rofel said. “It’s an occupation which has been vicious, cruel and inhumane and now has turned into military rule over almost every aspect of Palestinians’ lives. We also demand an end to U.S. complicity in that occupation.”

According to a report by Congressional Research Service, the Biden administration has allocated over $3.8 billion in military financing and missile defense funding to Israel this year.

During the demonstration, a diverse array of people that included elders along with young children, marched about a mile-long route carrying signs, banners, Palestinian flags, and art as they chanted in English and Arabic. Over 18 marchers carried one giant Palestinian flag together.

Some protesters carried signs stating 55 journalists have been killed by Israeli forces since 2000, a figure The Palestinian Journalists’ Union cites.

Other protesters carried signs calling attention to Ahmed Manasra, a 21-year-old Palestinian who has been imprisoned since he was arrested at age 13 after being with his cousin, who allegedly stabbed two Israeli settlers in Pisgat Ze’ev.

Chris Gazaleh, a Palestinian American artist based in San Francisco, made some of the art for the rally by creating signs inspired by Palestinian architecture and Arabic calligraphy to represent cities that Zionists ethnically cleansed during the 1948 Nakba.

During a speech at this year’s San Francisco Nabka rally, Rivka Louissant, a Haitian cultural worker who organizes with the an anti-war and anti-racism coalition ANSWER, spoke about how people and organizations are increasingly supporting an end to Israeli occupation and the struggle for Palestinian autonomy.

“Support for Palestinian rights and BDS is more popular than ever,” Louissant said. “The public is waking up to the evils of imperialism.”

In April of last year, Human Rights Watch accused Israel of “crimes of apartheid,” and in February of this year, Amnesty International described Israel as an “apartheid system,” and characterized its treatment of Palestinians as “a crime against humanity.”

Some local politicians have recently shown support for Israel. During a speech at the rally, AROC organizer Sharif Zakout criticized San Francisco Board Supervisor Rafael Mandelman for his recent visit to Israel for the Israel Seminar in light of Shireen Abu Akleh’s killing. Zakout characterized the seminar as “a propaganda trip.” The Israel Seminar is organized by the Jewish Community Relations Council, which has taken a public stand against the BDS movement, and has refused to denounce Israeli attacks against Palestinians. Photos from the trip, posted on May 15 and 16, also show Berkeley Mayor Jesse Arreguín, and San Mateo Councilmember Amourence Lee.

“We are here today to say the Bay Area does not put up with that BS,” said Zakout to cheers from the protesters. “We stand with oppressed people everywhere. From Haiti to Palestine to Sri Lanka, we stand by resisting all state violence, colonialism, occupation and warfare.”

What California Is Learning from Expanding Voters Rights