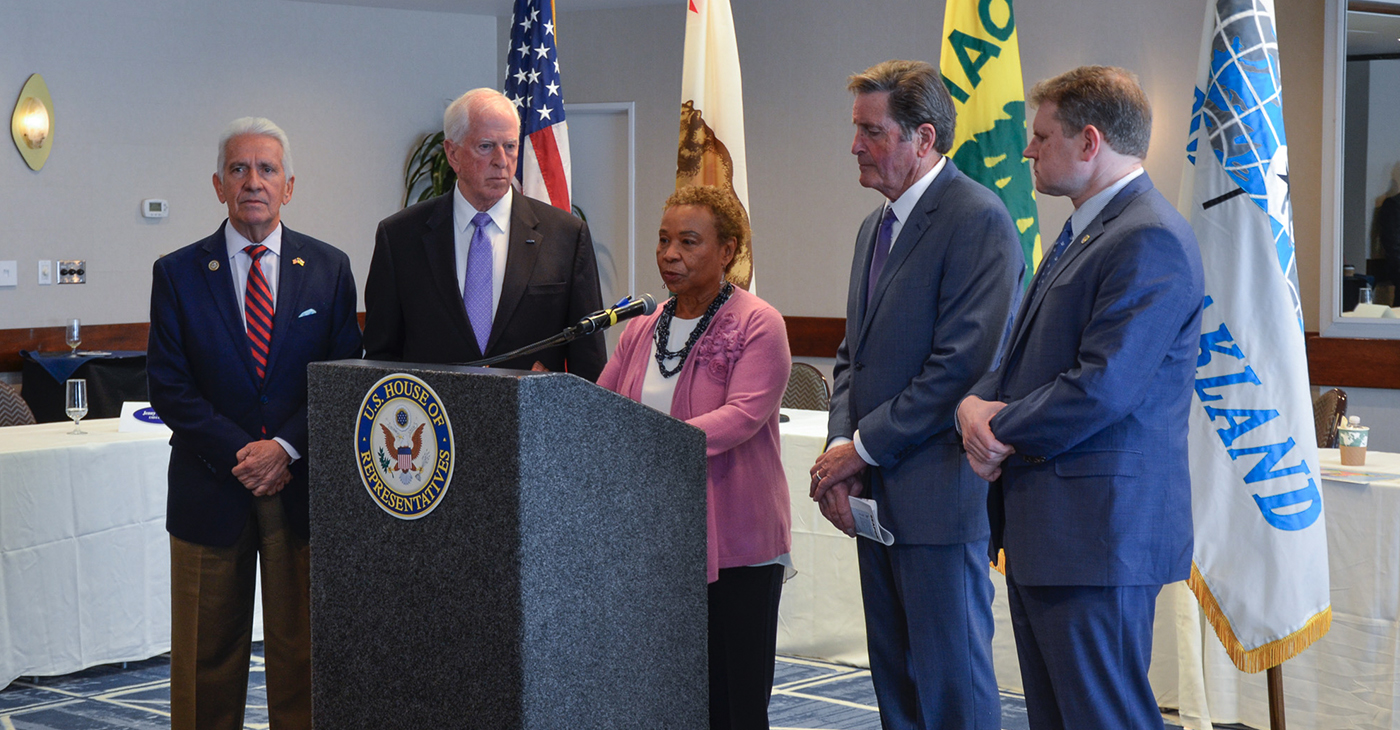 By Port of Oakland Communications Office

The Port of Oakland hosted a congressional supply chain stakeholder meeting this week in Jack London Square. The event was designed to address constituent business and trade industry stakeholder concerns about congestion and supply chain issues at the Port.

In addition to the Congressmembers, the forum featured federal and state government officials including Federal Maritime Commission Chairman Daniel Maffei, and representatives from the U.S. Department of Agriculture, CA Department of Food and Agriculture, CA State Transportation Agency and the Governor’s Office of Business & Economic Development.

Additional attendees included a wide range of supply chain stakeholders, with an emphasis on representation from the agricultural export community.

“During the pandemic, international trade on the California coast was disrupted in an unprecedented way. We know how much these delays have harmed California’s critical agricultural industry and those who rely on these producers,” said Rep. Barbara Lee (D-Oakland).

“We can’t stop here,” she continued. “We’re going to continue this discussion to improve maritime backlog in the future with a conservation approach. I’m thankful to my colleagues in Congress, community leaders, agricultural producers, and the Port for their contributions to this effort, and look forward to lending federal support for a more efficient and resilient supply chain.”

Federal Maritime Commission Chairman Daniel Maffei said getting empty containers into the interior of the country to service exporters is still a problem, but the situation is improving.

“Congestion is down substantially here on the West Coast,” said Maffei. “We’ve expanded our audit program to promote exporters and many of the major carriers have adopted comprehensive export strategies,” he said. “Certainly, willingness to meet agricultural exporters halfway is much more prevalent in the industry now than it was two years ago.”

Representative Jim Costa (D-Fresno) stated we’re all in this together.

“We are working to enhance our supply chain security by investing in our infrastructure and making products in America,” said Costa. “Today’s roundtable emphasized the work in progress to confront the supply chain crisis and improve our economy.”

“We are intensely focused on restoring key ocean carrier services that our trade community relies on to ship their goods into and out of Northern California,” said Danny Wan, Port of Oakland executive director.

Barbara Leslie, president of the Oakland Board of Port Commissioners said this is a group effort.

“We have built a strong foundation between the Port and our state and federal partners,” said Leslie. “We will need to continue to expand these partnerships to meet the needs of our trade community and to deliver benefits to our local residents and community members who rely upon on us and are impacted by our work,” she said.

Costa concluded that the day’s forum was important because food is a national security issue.

“Collectively we have a focus in terms of how we want to move forward. Clearly, we need to invest in our infrastructure, and there were a number of areas that were pointed out where we can make those investments, not only for the Port of Oakland but for California and therefore for our nation, to ensure that we maintain our competitive edge,” said Costa.

Prior to the meeting, the Port of Oakland hosted a tour of the Oakland Seaport, where leaders learned about Port operations. They viewed the Outer Harbor to highlight the location of the recently announced Port Infrastructure Development Program grant for $36 million to rehabilitate and restore a portion of that site for a green container support yard.

About the Port of Oakland