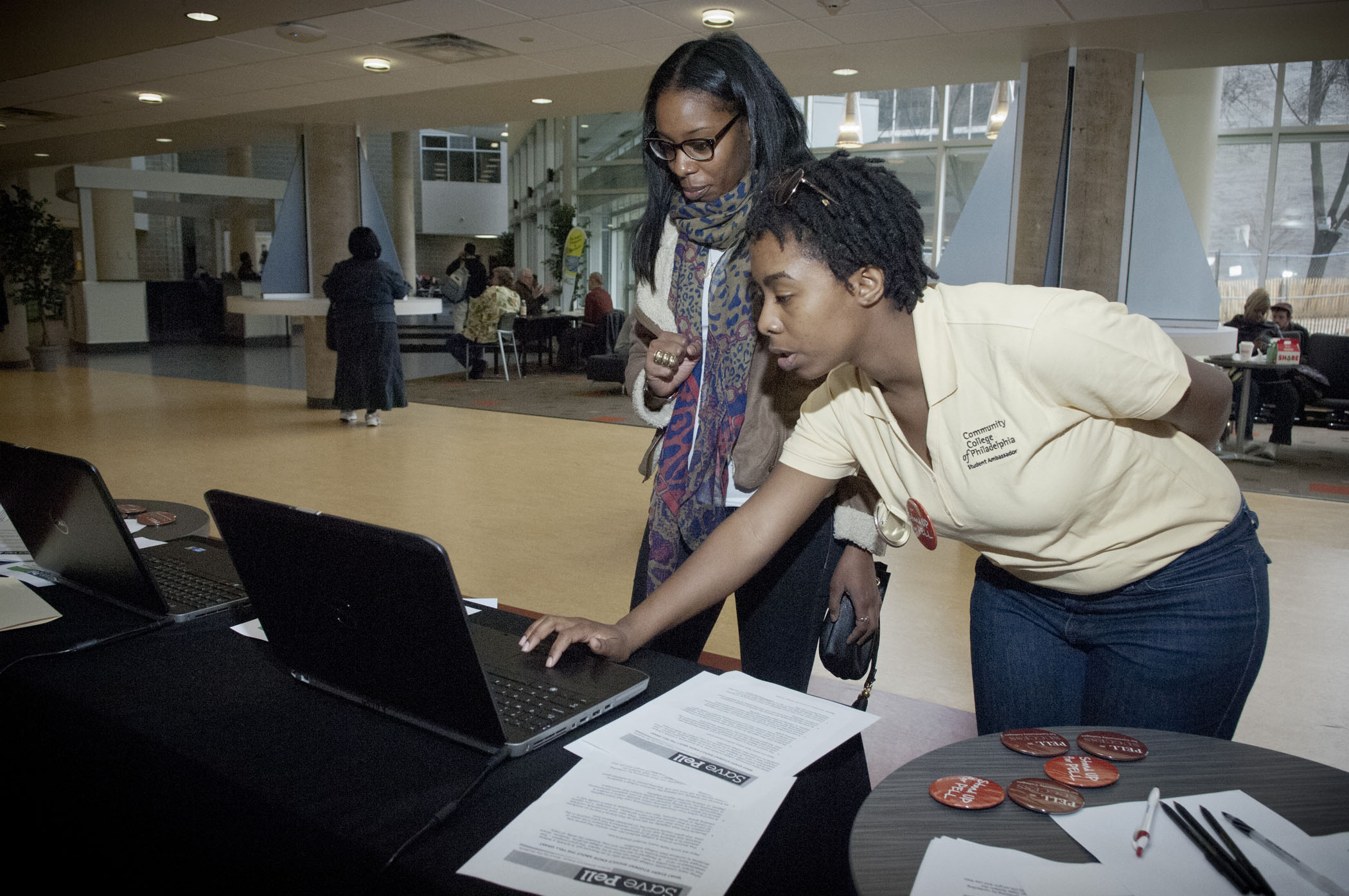 Bonita Rex (right), a Student Ambassador, passing out information about the changes to Pell eligibility rules and encouraging fellow students to sign onto the college’s Save Pell web site to send letters to their elected officials. (Photo Credit: Community College of Philadelphia)

[Editor’s Note: This is the second of two stories by NNPA Washington Correspondents Freddie Allen and Maya Rhodan examining how federal loan problems are hurting Black students in college.]

WASHINGTON (NNPA) – In many ways, the route Bonita Rex took to college is not unusual. After graduating from high school in 2007, family issues forced her to delay enrolling in college. Two years later, thanks to Pell grants and an improved family situation, she enrolled in the Community College of Philadelphia with a focus on general studies in cultural science and technology.

After Rex earns an Associate degree while holding down two part-time jobs, she plans to complete requirements for a bachelor’s degree at California State University.

But recent changes made to Pell grants has Rex, 24, worried that she might not be able to complete her bachelor’s degree at Cal State or anywhere else.

The Pell Grant program nearly doubled from assisting about 5 million students in 2009 to 9.4 million students in 2012. The program, which provides low-income students with financial aid they do not have to repay, was projected to face an $18.3 billion shortfall during 2012-2013 academic year because of an increase in need.

In an effort to maintain the maximum grant of $5,550 per academic year, Congress opted to eliminate four qualifications for the program, making an estimated 145,000 students suddenly ineligible for funds. In addition, students are no longer eligible to receive their Pell Grants during the summer semester.

During the 2012-2013 school year, if a student did not have a high school diploma or GED, had a family income of more than $23,000, needed less than 10 percent of the maximum award, or had received a grant for longer than 12 semesters, they were no longer able to receive Pell funds.

“Twelve semesters is kind of slim,” says Rex. “It’s unfair. They’re forcing non-traditional students to rush through our courses so that we have enough money to last through an Associate’s, Bachelor’s, and potentially a Master’s.”

After this year, Rex will have completed nine semesters on her Pell Grant, leaving only three to lead her through her studies at her dream school of California State University where she wants to study to become a dietician.

The 1,200 community colleges across the U.S. educate about 8 million students every year, representing almost half of all undergraduate students, according to the National Center for Education Statistics. Of the nearly 40,000 students enrolled at the Community College of Philadelphia, 56.7 percent are Black. Nationally, 32 percent of community college students are African-American.

A 2010 Journal of Blacks in Higher Education special report titled, “Pell Grants: The Cornerstone of African-American Higher Education,” stated, “The importance of the federal Pell Grant program cannot be overemphasized. This federal grant program for low-income students is the life-blood for hundreds of thousands of African Americans seeking higher education. Without this important program, many black students would not be able to enroll in higher education. Hundreds of thousands of other blacks would have to go deeper into debt or hold down a job while attending college if it were not for the Pell Grant program.”

Lezli Baskerville, president of the National Association for Equal Opportunity in Higher Education (NAFEO) based in Washington, D.C., says the changes to the financial aid programs that have occurred throughout the past year do not align with the president’s plan to have the majority of Americans college-educated by 2020.

“The cumulative impact of the aforementioned within the past year has been nothing short of catastrophic,” said Baskerville via email. “As the colleges and universities were developing innovative ways of addressing the challenges created by [the] Great Recession and the economic and financial challenges of the day, they were hit by what I call a ‘quintuple whammy,’ including shifts in the Pell Grant Program.”

Historically Black Colleges and Universities (HBCUs) are also feeling the pressure of the changes.

This year, President Obama set a goal of having the majority of Americans college educated by 2020. To meet that goal, HBCUs will need to increase the number of students they graduate per year from 35,000 to more than 57,000 by 2020.

“To reach the goals, approximately 8 million more Americans must attain a 2- or 4-year degree, roughly 2 million more African Americans, 167,000 of whom must graduate from HBCUs,” Baskerville said. “They cannot do this without an overhaul of the student financial aid system to invest more equitable and efficiently in expanding excellence, access, success, and diversity in higher education.”

In 2010, according to the National Center for Education Statistics, 45 percent of Black students enrolled in an institution of higher education had parents with a high school diploma or less.  Studies also show that a large number of HBCU students are from low-income families

In 2008, more than 155,000 students at HBCUs received federal Pell Grants—just 10,000 more than the number of those now deemed ineligible for the grants under the new qualifications.

More than half of African American professionals are graduates of Historically Black Colleges and Universities. According to a report by the Journal of Blacks in Higher Education, the majority of HBCUs have student bodies where more than two-thirds of those enrolled are eligible for Pell Grants.

“In spite of these challenges, HBCUs and [Primarily Black Institutions] continue to do the lion’s share of educating low-income, first generation, African American and diverse other students in STEM, health processions, teaching professions, and environmental profession,” Baskerville added.

According to a study by the United Negro College Fund’s Patterson Research Institute, 46 percent of HBCU students come from families with incomes lower than $36,000 and an average of half of all students qualify for Pell Grants.

All but a handful of HBCUs are in the South and that region is also taking a beating.

Schools across the Deep South have also experienced a decline in enrollment this year, which the University of Alabama Education Policy Center attributes to the eliminations made to the Pell Grant program.

In three of the most uneducated and impoverished states in the nation—Alabama, Arkansas, and Mississippi—just under 250,000 students were awarded Pell Grants to attend public colleges and universities in the 2010-2011 school year.

Two-thirds of the full time community college students in the states are Pell recipients.

According to the report, enrollment decreased at 47 of the 62 two-year colleges in those states during the 2012-2013 academic year, something the authors of the report attribute to the changes made to the Pell Grant program.

“The Deep South states clearly rely on public higher education to educate their citizenry beyond high school,” the report reads. “By definition, this means that Pell Grants are vital to enhancing college degree completion in the Deep South, for it is the community colleges where economically disadvantaged students begin higher education.”

After a round of changes to the federal Pell Grant program that eliminated assistance to low-income students in an effort to cut costs, the program is expected to have a $9.2 billion surplus at the end of fiscal year 2013.

But students no longer eligible for Pell Grants will have to look elsewhere.

“We can’t say that students will choose loans, but they are another option on the plate for them to seek out,” says Jennifer Freeman, the director of communications and marketing at Mississippi Valley State.  “It’s unfortunate as it relates to the cost of education going up, but we try our best to do much as we can.”

Despite such dips, many students and advocates for Pell Grants remain hopeful about the program’s future.

For two semesters, Bonita Rex couldn’t afford to buy books for all of her classes when her Pell Grant didn’t provide enough and the checks from her two minimum wage jobs couldn’t cover the rest. She says without the grant, however, she wouldn’t be able to afford school at all.

She says, “My Pell Grant is keeping me here.”