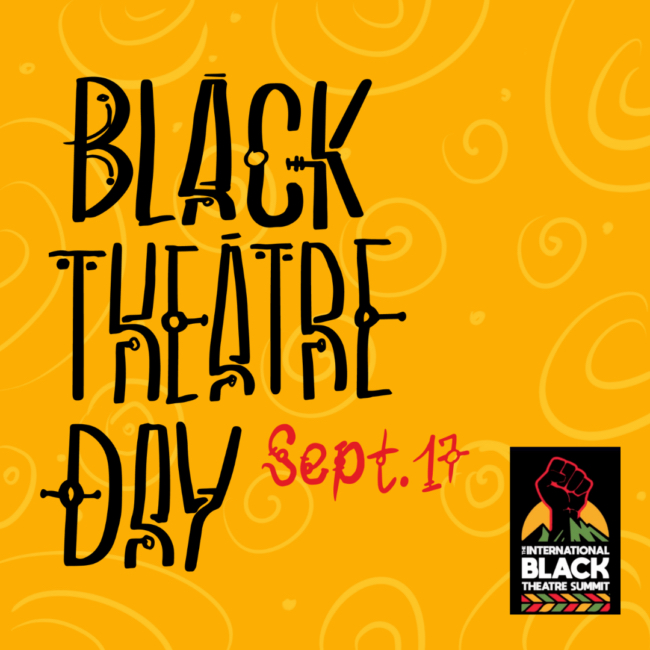 Historical funding patterns suggests that without intentional intervention like committing to collaborative action, significant foundational support for Black theatres will likely recede after 5 to 6 years.

Black Theatre Day (September 17) is an annual day of solidarity and service, to celebrate and support 21st century Black theatres in their ongoing efforts to build sustainable, institutional wealth.

Last fall, The International Black Theatre Summit, biennially convened by The CRAFT Institute, commemorated the 200th anniversary of the African Grove Theatre’s opening night on September 17, 1821 by launching the inaugural Black Theatre Day with a day of virtual events in collaboration with The Billie Holiday Theatre.  As the first known professional Black theatre company in the United States—composed of Black Americans and African-Caribbeans—the company launched the career of Ira Aldridge, who claimed to be an African prince as he toured Europe. In case you have not heard of Aldridge, he is arguably the greatest Shakespearean tragedian of all times. Currently staging a production of Carlyle Brown’s The African Company Presents Richard III, which recounts the story of their immense talent and experiences with racial bias, St. Louis Black Rep is one of many participating organizations hosting a series of such events to celebrate Black Theatre Day.

Black theatres provide a public service as an educational resource. After two decades of teaching in higher education, including the past five years at Dartmouth College, I found that most students entering my theatre and cultural studies classes as well as many K-12, undergraduate and graduate theatre educators I encounter through CRAFT, have little to no knowledge of Black theatre. Regardless of background, those connected to Black theatres in their communities, like the Douglass Theatre, founded in Macon, GA in 1921, and collaborative educational programs, are better informed about Black life and culture and a broader range of Black theatre. Black Theatre Day is an opportunity for everyone to learn more about Black theatre and how to collaborate and support Black-led theatre institutions, the beneficiaries of the illustrious legacies of the African diaspora.

Black-led theatre institutions are incubators for Black talent on stage and screen who mutually recognize their intrinsic value through various forms. Playwright, screenwriter and actress, Alice Childress, author of last season’s Broadway production of Trouble in Mind, studied at the historic American Negro Theatre which launched the careers of Sidney Poitier, Harry Belafonte, and Ruby Dee. Tony Award winner Ruben Santiago Hudson, an alum of the Negro Ensemble Company and protégé of the esteemed Broadway director and Lloyd Richards, former Dean of the Yale Drama School, also wrote, directed, and starred in his 2021 Broadway production of Lackawana Blues. This Broadway season, Samuel L. Jackson will star in August Wilson’s The Piano Lesson directed by LaTanya Richardson Jackson. Both are NEC and HBCU alums of Morehouse College and Spelman College, respectively. Playwright Lynn Nottage, who wrote the book for MJ: The Musical established her roots at The Billie Holiday Theatre, where stage and screen actor, Wendell Pierce, currently starring in the Broadway production of Death of a Salesman, serves on the board. Pierce is a native of New Orleans, the home of Black-led theatre institutions like No Dream Deferred and Ashé Cultural Arts Center. Intentional Black theatre connections and collaborations are the future.

Ongoing advocacy for greater economic equity is a necessity in order to secure Black theatre’s future. MacArthur Genius, Dominique Morisseau’s recent calls to dismantle and rebuild Broadway, a commercial enterprise, for the benefit of the field are reminiscent of legendary playwright August Wilson’s 1996 speech, “The Ground on Which I Stand,” in which he proclaimed that “Black theatre is alive, it is vibrant, it is vital…it just isn’t funded.”  The Helicon Collaborative study documented these persisting disparities nearly twenty years later. Their study found out of $4 billion in philanthropic support from foundations to arts organizations “just 2 percent of all cultural institutions [all white] receive nearly 60 percent of all contributed revenue” primarily producing Eurocentric programming.  The other 98 percent of arts organizations (including only 4 percent of arts organizations of color with Black theatres as a fraction of that percentage) split the remaining 40 percent.

To be sure, arts foundations and nonprofit leaders are increasingly aware of the inequities as reflected in support from the Mellon Foundation, Ford Foundation, Doris Duke Charitable Foundation and other sources for special initiatives in recent years. Still, historical funding patterns suggests that without intentional intervention like committing to collaborative action, significant foundational support for Black theatres will likely recede after 5 to 6 years.

Monica White Ndounou is an Associate Professor of Theater and affiliate faculty in African and African American Studies and Film and Media Studies at Dartmouth College.  She is the Founder and Executive Director of The CRAFT Institute, Convener of The International Black Theatre Summit, the author of the award-winning book, Shaping the Future of African American Film: Color-Coded Economics and the Story Behind the Numbers (Rutgers UP 2014) and co-founder of CreateEnsemble.com.  She is a Public Voices Fellow