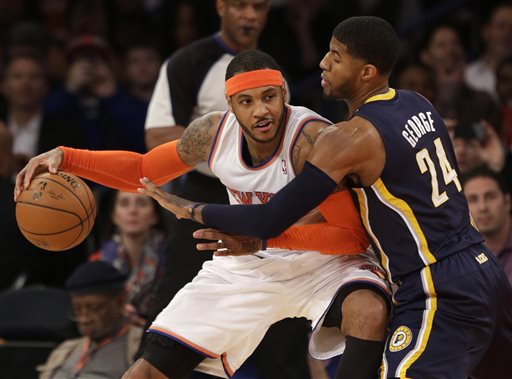 In this March 19, 2014, file photo, New York Knicks’ Carmelo Anthony, left, tries to move around Indiana Pacers’ Paul George during the first half of an NBA basketball game at Madison Square Garden in New York. Two people with knowledge of the details say that Anthony has informed the Knicks he intends to become a free agent. (AP Photo/Seth Wenig, File)

HOUSTON (AP) — Prized free agent Carmelo Anthony visited Houston on Wednesday and was greeted with images of him in two Rockets uniforms.

A day after visiting the Bulls, the New York Knicks’ star continued his tour in Houston. A video board outside the Toyota Center depicted one image of Anthony in Houston’s white uniform with red lettering and another in a retro red and yellow uniform. Between the pictures was Anthony’s logo with the word ‘Melo’ in it.

He was wearing his No. 7 in both renderings, despite the fact that current Rocket Jeremy Lin wears that number. The Rockets would likely have to unload the point guard to snag Anthony.

Lin responded to the snub on Twitter on Wednesday afternoon with a bible verse. He tweeted the verse Luke 6:29: “If someone slaps you on one cheek, turn to them the other also. If someone takes your coat, do not withhold your shirt from them.”

He later tweeted a much stronger response to the jersey pictures.

“Im entitled to standup for myself/say i felt disrespected as i did thru tweet but point is love unconditionally/as jesus loved me,” Lin tweeted.

Houston got the biggest prize in free agency last offseason when it signed Dwight Howard away from the Lakers, with designs on making a deep run in the playoffs this year. But the Rockets were bounced from the postseason in the first round just as they were the year before. So they started looking for more upgrades to the roster.

They made the first move to free up money for adding players by agreeing to a trade that will send center Omer Asik and cash considerations to the New Orleans Pelicans for a protected future first-round draft pick.

Lin is set to make more than $8 million next season in the final year of a three-year contract. That’s a steep price for a backup after he was relegated to the bench last season because of solid play by Patrick Beverley and started just 33 games.

The 30-year-old Anthony would add another proven score to a team that features Howard and Harden. Anthony averaged 25.2 points last season with the Knicks, which was second in the NBA to Oklahoma City’s Kevin Durant. Harden was fifth in the league with a 24.3 average, but the team struggled in its playoff series against the Trail Blazers while focused on shutting him down.

Anthony is expected to meet with the Mavericks and the Lakers before sitting down with the Knicks.

The Rockets would not provide details about Anthony’s meeting Wednesday.