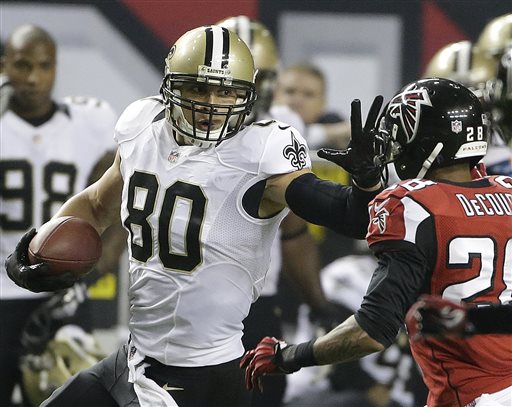 In this Nov. 21, 2013 file photo, New Orleans Saints tight end Jimmy Graham (80) tries to get past Atlanta Falcons free safety Thomas DeCoud (28) during the second half of an NFL football game in Atlanta. An arbitrator has sided with the Saints in ruling that Graham can only be considered a tight end for the purposes of his franchise tag designation. (AP Photo/John Bazemore, File)

NEW ORLEANS (AP) — The Saints’ Jimmy Graham and the NFL Players Association were dealt a setback Wednesday when an arbitrator ruled that he can only be considered a tight end for the purposes of his franchise tag designation.

NFLPA had filed a grievance arguing that Graham was used as a wide receiver often enough to qualify for the more lucrative receiver tag. But arbitrator Stephen Burbank disagreed and now the NFLPA is reviewing his ruling, and will advise Graham on his options, which could include an appeal.

Graham’s case is being closely watched around the league because it could set a precedent for negotiations involving players who fill diverse roles in their teams’ offensive or defensive schemes. For example, some outside linebackers in a 3-4 defensive scheme could argue their right to receive the higher defensive end tag.

NFL franchise tags, which allow each team to keep one prized player who is due to become a free agent, were set this year at $7 million for tight ends and $12.3 million for receivers.

Burbank, who is also a University of Pennsylvania law professor, found that Graham could fulfill the standard duties of a tight end when he was lined up in the slot or within 4 yards of an offensive tackle, as he was for most of his snaps.

Burbank further pointed out that defenses usually accounted for Graham as a tight end, regardless of his alignment, by assigning a linebacker or safety to cover him.

“Like tight ends, wide receivers and running backs often line up in the slot,” Burbank’s ruling stated. “The defense employed against any player so aligned turns on the player’s position, not his alignment, because of the physical attributes and skill sets of the players in those positions.”

Burbank indicated there could be merit to the NFLPA contention that Graham cannot be considered a tight end when he does in fact line up as a wideout. However, because both sides stipulated that Graham lined up within 4 yards of an offensive tackle for nearly 55 percent of his snaps, Burbank said he did not need to address the minority of instances in which offensive formations employed by Saints coach Sean Payton placed Graham at a wider distance from the offensive line.

The NFL’s collective bargaining agreement states that franchise tags should be applied according to the position at which a player lines up for the majority of his snaps.

Graham has skipped Saints offseason practices while holding out for a new, long-term contract. A favorable ruling from Burbank would have further enhanced negotiating leverage for Graham, who last season led the Saints with 86 catches for 1,215 yards and 16 touchdowns.

Saints spokesman Greg Bensel said the club would have no comment on the ruling, and Sexton did not respond to a request for comment.

In its statement, the NFLPA said: “We will also continue to assist Graham and his representation as necessary to help the player reach a fair long-term deal with the New Orleans Saints.”

Such disputes are not frequent, but draw lots of attention because of their potential to set a precedent.

Baltimore’s Terrell Suggs, the 2011 Defensive Player of the Year, argued in 2008 that he should be tagged as an end, not a linebacker. The difference back then was about $800,000. That dispute ended when Suggs signed a new long-term contract with the Ravens. He later helped them win the 2012 NFL championship.

July 15 is the final day a team can sign 2014 franchise players to long-term extensions. Otherwise, they must play under their franchise tag designation for one season, after which they would be set to become free agents.