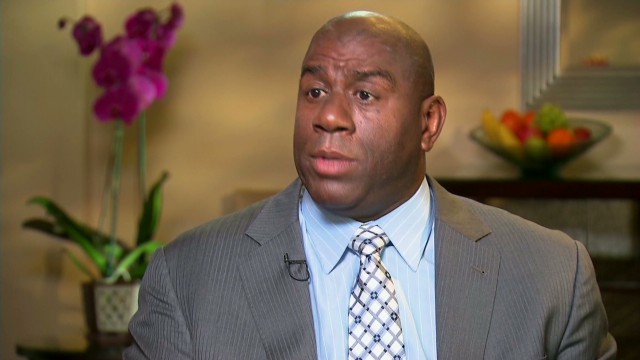 Magic Johnson during his interview with Anderson Cooper on May 13, 2014 (CNN)

(Los Angeles Times) – Here was a story, it seemed, that resonated with a disparate and diffuse metropolis.

It was the tale of one city and two men — one on the ascent, a giant who staked his life’s claim not on his championship banners, but on minority ownership in business and professional sports; the other on the decline, shouting over his shoulder as he’s being shown the door.

Across the Los Angeles area — at a coffee shop in Ladera Heights, outside the gleaming office buildings of Beverly Hills — the verdict came down Tuesday and it was not generous to Donald Sterling, the 80-year-old billionaire Clippers owner.

For decades, Los Angeles has served as an incubator for race relations. The melting pot was forged in the embers on Western Avenue, rendered by Watts and the National Guard, seasoned with O.J. Simpson and the LAPD, watched to a boil by a public that couldn’t even agree on the difference between riot and unrest.

It fell to Sterling, of all people, to deliver a moment of clarity and unity when he responded to calls for his ouster from the NBA by attacking Magic Johnson.

Jill Abramson Being Replaced by Dean Baquet at Times