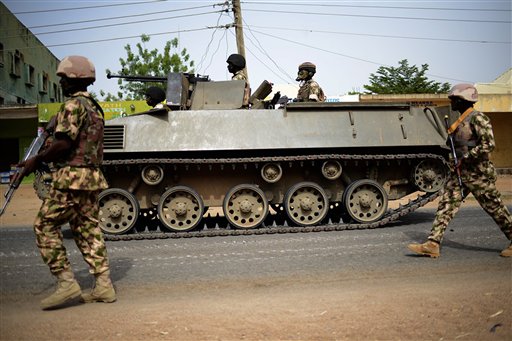 In this photo taken Monday March 9, 2015, Nigerian troops patrol in the north-eastern Nigeria city of Mubi, some 20 kms (14 miles) west of the Cameroon border. (AP Photo/str)

YOLA, Nigeria (AP) — At least 9,500 people have returned to Nigeria since the Cameroonian government said last month it will expel unregistered Nigerian refugees as part of the fight against Boko Haram, a Nigerian official said.

Some of those who have returned claimed they were mistreated by the Cameroonian authorities, including being crammed in trucks leading to suffocation and alleged deaths.

The official coordinating Nigeria’s National Emergency Management Agency activities in Adamawa state, Saad Bello, said late Tuesday that 9,500 people have come through the Sahuda border post in the state and many of the returnees are from Borno state which has seen constant attacks by Boko Haram extremists.

Cameroon’s government has said suspected Boko Haram fighters disguised as refugees with explosives hidden in their luggage were arrested at a camp in northern Cameroon in early August.

The governor of the Far North Region of Cameroon, Midjiyawa Bakari, said that 5,000 Nigerians have been sent back to their country within the past two months.

He said those who had been expelled had refused to go to a refugee camp at Minawao and preferred to remain in towns and villages. “With the growing insecurity and after a series of suicide bombings in our country we took the decision to send them back.”

Those who were sent back complained of abuses. “We are overcrowded in trucks used for transporting cows. Even in our truck two women and a little boy died. It’s very pathetic, we buried their corpses in a nearby bush,” claimed 55-year-old returnee Ahmadu Musa.

“My baby and I nearly lost our lives in the overcrowded truck conveying about 200 people from a refugee camp in Kusiri to the border,” said Yakura Aliyu.

“Little children perched on the iron bars on top of the truck. Those on the floor could not breathe properly. Many defecated and urinated in the truck while the driver refused to stop throughout the 20-hour journey to the border. Some people died in the truck,” Aliyu added.

Nearly 20,000 people have died and almost 2 million have been driven from their homes during the Islamic extremist group’s six-year-old uprising.

In Policy Shift, Cuba Welcomes Back Doctors Who Deserted