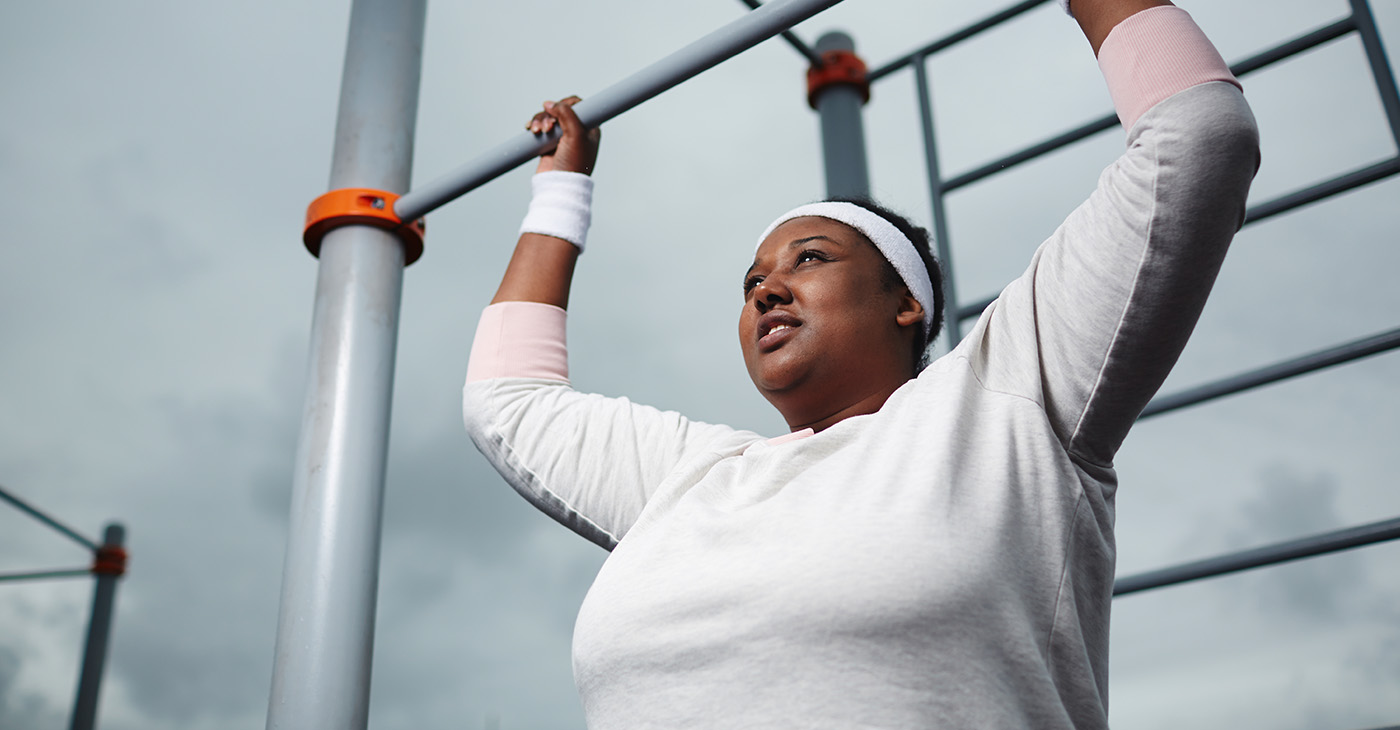 Today, there is still a disproportionate ratio between the height of most African American women and their weight which is how body mass index is measured. (Photo: iStockphoto / NNPA)

Betty Busby, 55, has struggled with her weight since high school. “It’s in my genes to be chubby, and I have always thanked God that I have a man that loves my shape,” she said. “He still thinks I’m sexy with my small waistline, big hips and thighs. I will be forever grateful for that.”

However, Busby’s significant other has been upset—and sometimes frustrated—with her recent drop in weight and size of her hips. “I’m attempting to improve my health by dieting and exercising,” Busby explained. She is under a diet regimen and is taking medication for high cholesterol and hypertension after feeling the pain of extra lower-body weight. “I sometimes get annoyed because he is constantly [overseeing] my meals and complains about the difference in hip size.”

In addition to health issues, Busby said her shape has caused problems in shopping for clothing that smaller women can typically buy off-the-rack. Men are often verbally assertive with unsolicited comments and reactions to well-endowed women.

“As a young adult, I had to learn to live with the harassment,” she said. “Butt slaps were really offensive. I just hated when a guy would not back down with coming up to me in a public place. I asked one guy why he was so persistent, and he responded with: ‘I’m afraid if I go home without your number, I’ll never meet someone like you again.’”

Busby also said the work world can be a tricky environment, particularly if you encounter a female superior with different [smaller] physical attributes than you. “Males will move boxes for you, open doors and pay special attention to you,” said Busby who is employed by the Los Angeles Department of Public Social Services.

Some will argue that there are a number of cultural barriers (fashionability, family responsibilities, stressful lifestyle) that may also challenge or prevent many African American women from exercising regularly.

United States Surgeon General Regina Benjamin stated in an interview for the Chicago Tribune, “Oftentimes you get women saying, ‘I can’t exercise today because of my hair or get my air wet.’” For some, there’s a trade-off between preserving heat-required hairstyles and physical fitness and research suggests that misplaced vanity is at the root of the problem.

The Washington Post and the Kaiser Family Foundation conducted a poll to get the perspective directly from the source. According to The Washington Post, the poll revealed that “although Black women are [generally] heavier than their White counterparts, they report having appreciably higher levels of self-esteem. That figure was 66 percent among Black women considered by government standards overweight or obese.”

Research like this also suggests that, as a culture, the majority of African American women see no harm in being too vain to take accountability for their health. The 1992 hit, ‘Baby Got Back,’ by Sir Mix-a-Lot, highlighted the fact that many Black men embrace full-figured black women, despite contrary beliefs:

“ I want em’ real thick and juicy so find that juicy double Mix-a-Lot’s in trouble,” The old-school rapper went on to say, “So Cosmo says you’re fat, Well I ain’t down with that ‘Cause your waist is small and your curves are kickin.’”

Songs like this and others inspired Black women to love the skin they’re in and to be proud of their “thickness” because men appreciate rolls, curves and big bottoms.

For years, many R&B, Hip Hop & Rap musicians have type-casted the women they have in their music videos. And more often than not, the video vixens usually have a small waist, thick hips, thighs and a big butt. Black women who aren’t “thick” or “curvy” are going to great measures to achieve this look.

The American Society for Aesthetic Plastic Surgery reports that ‘cosmetic augmentation among black people increased 56 percent between 2005 and 2013 and is still rising.”

Richard White, M.D. physician, specializing in internal medicine and research at the Mayo Clinic in Jacksonville, Fla., has studied the correlation between health literacy and the effect is has on chronic health disease and obesity in underserved communities. “It’s really going to require the African-American community to come together as a unit to really say, ‘you know what? this is our health as a community, this is something that we’re going to take the initiative and interest to improve ourselves and not necessarily rely on outside or external forces to try and make it happen for us,” White said. He encourages his African American patients to take a personal inventory of their lives and take accountability for the foods they are consuming and the decisions they make regarding physical activity.

The lure of fatty food

“I think that we can create in our community a mentality that this is something that we don’t have to accept,” he added. “We have the collective energy as a community and as a culture to push back and to really make changes.”

In most African American gatherings and celebrations, food is the highlight of the event and often sought out as the most important. The problem is that calorie-dense foods that are rich in flavor—but lack vital nutrients—are usually presented as a way of fellowship with little to no portion control.

“The thing that I really feel passionate about is empowering, particularly our African-American community to really understand the influences that have been propagated from across the culture that have led to poor health outcomes,” White said. “There’s a social injustice that’s being propagated towards us as a community.”

Researchers speculate whether this may be the first generation to not outlive their parents, considering the alarming numbers of obese children, who later become obese adults. There is a psychological approach to preventing obesity and it is the responsibility of the parent(s) to have candid discussions about what children should put into their bodies and what foods are important to consume in moderation.

The U.S. Department of Health and Human Services Office conducted a study in 2015 that revealed African American women were 60 percent more likely to be obese than non-Hispanic White women. Today, there is still a disproportionate ratio between the height of most African American women and their weight which is how body mass index is measured.

“If you look at a lot of those commercials for fast food industries, you will see they’re specifically targeting African American communities and it’s sad, but it’s something that we as a culture, have sort of allowed to happen,” White explained. “These industries are multi-billion-dollar industries for a reason because we continue to give them our dollars.”

Percell Keeling is a distance runner and owner of Simply Wholesome, a full-service health food store and restaurant in Los Angeles. Keeling works alongside health professionals to help provide insight for the community on eating healthy and helping to increase life expectancy.

Keeling and his team sell fresh foods and natural, holistic products. Consumers have a variety of organic foods to choose from at Simply Wholesome. Whether you are vegan, vegetarian or a meat-eater, Simply Wholesome provides a tasty, Caribbean twist to healthy eating.

Keeling recalls recognizing the need for exposure and resources for natural foods when he first opened his business. “It costs money to eat well, unfortunately,” he said. “The system is kind of set up like that now… A lot of times most people are a product of their environment, even if it is on a subconscious basis.”

According to the Centers for Disease Control and Prevention, Black women had the highest percentage of fast food consumption at 42.9 percent versus 36.3 percent of White women and 35.8 percent of Latino females. In addition to proper nutrition, exercise is a key component to combat obesity and other cardiovascular complications. The U.S. National Library of Medicine reported only 36 percent of adult African American women achieve the national physical activity guidelines for aerobic activity.

With six years of experience as a all-in-one fitness expert, Sergent opened his own business, Denzell’s Gazelle

“My aim is to help women identify their goals, design a fitness program that fits their needs, guide them through every exercise, every 45- 60- or 80-minute workout and have them feeling refreshed after a free, 30-minute massage,” Sergent said.

Unlike many fitness experts, Sergent takes a realistic approach to coaching women and helping them to reach their individual goals. He offers free consultations to those seeking a change in lifestyle and recommends seeking professional expertise on how to manage weight loss. “You need an outside look into your dietary needs,” Sergent said.

“Foods that work for some people may not work for you.” Despite the cultural standards and familiarity of “plus size” African American women—and the accompanying labels such as “plump,” “thick,” “heavyset,” “healthy,” etc.—there are dire health consequences for this segment of the population if their weight continues to increase.

These include the onset of diabetes, heart disease, high blood pressure, high cholesterol, bone damage, and a declining self-esteem in a world that can unfairly place a premium on a slim and svelte physical appearance.

‘Rondo: Beyond the Pavement’ shines a light on the intentional destruction of a thriving Black community