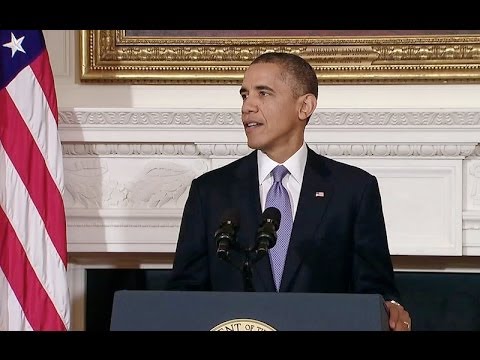 After Obama and Democrats defeated repeated efforts over the past two weeks by House Republicans to repeal the Affordable Care Act, the president’s signature health care achievement, the Senate passed the budget measure Wednesday night by a vote of 81-18 followed several hours later by a 285-144 vote in the Republican-controlled House. In the House, 87 Republicans joined the solidly united Democrats to assure the victory. All of the “no” votes in both chambers were cast by Republicans.

The Continuing Appropriations Act, 2014 is retroactive to Oct. 1, the beginning of the new fiscal year, and funds the government through Jan. 15, 2014. The debt limit has been extended through Feb. 7.

President Obama signed the bill around 12:30 a.m., which set the stage for Thursday’s reopening of the nation’s parks and monuments, returning furloughed federal employees to work and restoring shutdown government services.

Shortly before 1 a.m. Thursday, the Office of Management and Budget issued a formal memorandum ordering federal agencies to reopen.
“Today, the President signed a continuing resolution that brings employees back to work and reopens many government functions,” OMB Director Sylvia Mathews Burwell said in the memo addressed to all heads of executive departments and agencies.

“All employees who were on furlough due to the absence of appropriations may now return to work. You should re-open offices in a prompt and orderly manner.”

Although ending the shutdown was a clear victory for President Obama, he struck a conciliatory tone.

“I’ve said it before, I’ll say it again: I am willing to work with anybody, I am eager to work with anybody – Democrat or Republican, House or Senate members – on any idea that will grow our economy, create new jobs, strengthen the middle class, and get our fiscal house in order for the long term,” Obama said in a brief, oddly-timed White House appearance Wednesday night between the Senate and House voting. “I’ve never believed that Democrats have a monopoly on good ideas. And despite the differences over the issue of shutting down our government, I’m convinced that Democrats and Republicans can work together to make progress for America.”

Obama, speaking at the White House Thursday morning, said: “Now, there’s been a lot of discussion lately of the politics of this shutdown. But let’s be clear: There are no winners here.These last few weeks have inflicted completely unnecessary damage on our economy. We don’t know yet the full scope of the damage, but every analyst out there believes it slowed our growth.”

The president said, “But to all my friends in Congress, understand that how business is done in this town has to change. Because we’ve all got a lot of work to do on behalf of the American people – and that includes the hard work of regaining their trust. Our system of self-government doesn’t function without it. And now that the government is reopened, and this threat to our economy is removed, all of us need to stop focusing on the lobbyists and the bloggers and the talking heads on radio and the professional activists who profit from conflict, and focus on what the majority of Americans sent us here to do, and that’s grow this economy; create good jobs; strengthen the middle class; educate our kids; lay the foundation for broad-based prosperity and get our fiscal house in order for the long haul. That’s why we’re here. That should be our focus.”

To returning workers Obama said, “Thank you. Thanks for your service. Welcome back. What you do is important. It matters.”

Regardless of whether President Obama wants to publicly admit it, the vote was an undeniable victory for the White House over Tea Party activists who shut down the federal government in an unsuccessful attempt to defund the Affordable Care Act, also known as Obamacare.

Kelly Ayotte (R-N.H.) said, “If we learn nothing else, I hope we learn we shouldn’t get behind a strategy that has no endgame.”

The White House made a minor concession by agreeing to require verification of the income of those qualifying for health insurance subsidies.
After Republicans lost their bid to repeal national health legislation, they suffered a series of other setbacks, including a last-ditch proposal that would have eliminated employer contributions for lawmakers and forced the president, vice president and all political appointees to participate in health care exchanges administered by states without a tax subsidy.

“We took some bread crumbs and left an entire meal on the table,” Senator Lindsey Graham (R-S.C.) said after the deal was announced. “This has been a really bad two weeks for the Republican Party.”

Despite their well-known animus for each other, Senate Majority Leader Harry M. Reid (D-Nev.) and Minority Leader Mitch McConnell (R-Ky.) reached a last-minute deal Wednesday that ended impasse. They announced their agreement Wednesday afternoon on the Senate floor.
“After weeks spent facing off across a partisan divide that often seemed too wide to cross, our country came to the brink of disaster,” Reid said. “What we’ve done is send a message to Americans…and in addition to that, to the citizens of every country in the world, that the United States lives up to its obligations.”

Standing next to Reid in the Senate, McConnell indicated that the nation hasn’t seen the last of GOP efforts to eliminate the Affordable Care Act.

“Republicans remain determined to repeal this terrible law,” he said. “But for today – for today –the relief we hope is to reopen the government, avoid default and protect the historic cuts we have achieved under the Budget Control Act.”

Although the Affordable Care Act was passed by the House and Senate, signed into law by President Obama, and upheld by the U.S. Supreme Court, House Republicans have made more than 40 attempts to repeal the landmark legislation – all without success.

The anti-health care movement has been led by doctrinaire Tea Party activists. But their popularity has taken a beating throughout the standoff.

According to a poll released Wednesday by the Pew Research Center for the People & the Press, “The Tea Party is less popular than ever, with even many Republicans now viewing the movement negatively. Overall, nearly half of the public (49%) has an unfavorable opinion of the Tea Party, while 30% have a favorable opinion.”

It continued, “In February 2010, when the Tea Party was less well known, the balance of opinion toward the movement was positive (33% favorable vs. 25% unfavorable). Unfavorable opinion spiked to 43% in 2011 after Republicans won a House majority and Tea Party members played a leading role in that summer’s debt ceiling debate.

While most Tea Party members represent safe political districts, there is little doubt that the latest fiasco has hurt the Republican brand, making them less attractive in the 2014 midterm elections.

An NBC/Wall Street Journal poll found, “By a 22-point margin (53 percent to 31 percent), the public blames the Republican Party more for the shutdown than President Barack Obama – a wider margin of blame for the GOP than the party received during the last shutdown in 1995-96.
“Just 24 percent of respondents have a favorable opinion about the GOP, and only 21 percent have a favorable view of the Tea Party, which are both at all-time lows in the history of poll.”

Senators Reid and McConnell agreed as part of their deal to set up a budget conference committee assigned to put the country on a long-term path to fiscal stability. The panel will be chaired by Senator Patty Murray (D-Wash.), chair of the Senate Budget Committee, and Rep. Paul Ryan (R-Wis.), chairman of the House Budget Committee. The budget conference committee is scheduled to issue its report by Dec. 13, three weeks before the new debt ceiling limit is reached on Jan. 15.

But there were no immediate indications that this committee will be any more successful than the Bowles-Simpson commission (the National Commission on Fiscal Responsibility and Reform), named after Democratic co-chair Erskine Bowles, former White House chief of staff under Bill Clinton, and Republican co-chair Alan Simpson, the former Senator from Wyoming.

The special commission was appointed by President Obama in 2010 to identify “…policies to improve the fiscal situation in the medium term and to achieve fiscal sustainability over the long run.” Although 11 out of 18 commissioners, equally divided by Democrats and Republicans, supported the group’s findings, that fell short of the 14 votes needed to send it to Congress for approval.

In the wake of another major deficit crisis, Congress created the Joint Select Committee on Deficit Reduction, better known as the Supercommittee, in 2011. In addition to identifying $917 billion in cuts to accompany a $900 billion debt limit increase, the Supercommittee was given the task of developing a deficit reduction plan for the next 10 years. That effort also failed.

“After months of hard work and intense deliberations, we have come to the conclusion today that it will not be possible to make any bipartisan agreement available to the public before the committee’s deadline,” the Supercommittee said in a statement issued on Nov. 21, 2011. The Supercommittee was disbanded two months later.

Because Republicans felt that Obama would blink during the latest budget showdown, they had no exit strategy in the event the president did not give in to their demands. That proved to be a costly miscalculation. What the most rabid wing of the GOP did not realize was that Obama had already decided not to give in to their threats to shut down government if they did not get their way.

According to the New York Times, “More than two years ago, President Obama was still in the thick of his previous showdown with Republican House leaders over the nation’s debt limit when he called five senior advisers into his office. He did not ask their advice, one said. Rather, he told them, in a way that brooked no discussion: From now on, no more negotiating over legislation so basic and essential to the economy, and the country.

“’I’m not going through this again. It’s bad for democracy. It’s bad for the presidency,’” Mr. Obama said, according to the adviser, who declined to be identified describing internal discussions. The president then told the group – his Treasury secretary, chief Congressional lobbyist, chief economic adviser and both his and the vice president’s chiefs of staff – to spread that word, “‘even in your body language.’”

In the end, Republicans got the message.

“We’ve been locked in a fight over here, trying to bring government down to size, trying to do our best to stop Obamacare,” House Speaker John Boehner (R-Ohio) told a Cincinnati radio station on Wednesday. “We fought the good fight. We just didn’t win.”

That doesn’t mean they won’t win the next fight. Although President Obama refused to be steamrolled by Tea Party antics, he has signaled a willingness to compromise with Republicans, even on issues dear to his Democratic base.

“At no point have we said what our demands are. All you’ve heard was what their demands are,” Rep. Gregory W. Meeks (D-N.Y.) told Politico. “Maybe we should put down what our demands are of what we need and what we want because there’s things that are important and dear to us also, and then the negotiations start from there.”