Obama Back at White House after Summer 'Vacation'
Advertisement 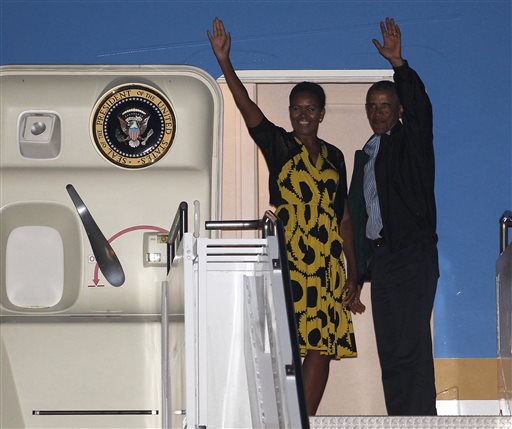 WASHINGTON (AP) — The “vacation” is over and it’s back to the White House for President Barack Obama.

Obama, who returned to Washington late Sunday after two weeks on the Massachusetts island of Martha’s Vineyard, will have to decide whether the recent beheading of an American by Islamic State militants is reason enough to take a step he has long resisted taking.

Obama has avoided intervening militarily in Syria for three years despite the rising death toll in the country’s civil war, the government’s use of chemical weapons against civilians and the rise of the Islamic State group amid the chaos there.

The president’s own military leaders and some of his critics in Congress are pressuring him to go into Syria in an effort to defeat the group.

White House officials have suggested that military airstrikes in Syria are an option, though the officials say specific military proposals have yet to be presented to the president.

Obama’s attempt at rest and relaxation was largely overtaken by events involving Islamic State militants in Iraq and Syria, including the videotaped killing of a U.S. journalist they had been holding hostage. The unrest in Ferguson, Missouri, after the fatal police shooting of an unarmed black man was another major source of concern for Obama and his advisers.

Criticized for being away from Washington under the circumstances, Obama broke from his vacation to deliver statements on Iraq, Missouri and journalist James Foley on four occasions, including one delivered during two days he spent at the White House in the middle of the getaway. The unusual mid-vacation return to Washington had been scheduled before those issues came to dominate the news.

Still, in the midst of daily briefings, telephone conversations with world leaders and other responsibilities, Obama squeezed in nine rounds of golf on an island he has turned into his summer presidential retreat while shrugging off the criticism about how he was spending the time.

Obama was briefed Sunday on the release of another American who was being held hostage in Syria by an al-Qaida linked group, as well as an earthquake in California. Before leaving the island, he and his wife, Michelle, went hiking with friends the White House did not identify.

Obama will not spend much time at the White House in the coming weeks.

He is scheduled to address the American Legion convention on Tuesday in Charlotte, North Carolina, and help raise money for Democratic candidates at fundraisers Friday in New York and Rhode Island.

Travel to Estonia and attendance at a NATO summit in Wales begins immediately after Labor Day. The trip is expected to focus on U.S. and European concerns over Russia’s provocations toward Ukraine.

Three Quarters of Whites Don’t Have Any Non-White Friends