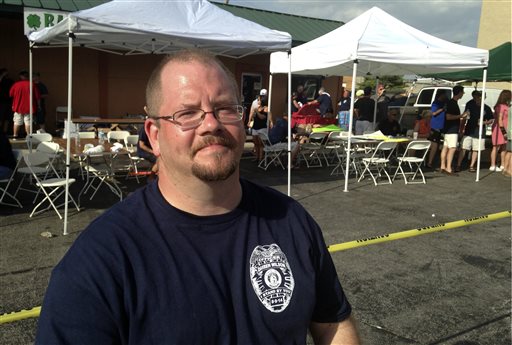 In this Aug. 23, 2014 photo, Keith Stephens stands at a rally in support of policeman Darren Wilson, in St. Louis. Wilson is the white officer who shot unarmed, black 18-year-old Michael Brown in Ferguson, Mo. Like many Americans, Stephens has formed strong opinions about the case. (AP Photo/Jesse Washington)

ST. LOUIS (AP) — Lamont Jones and Keith Stephens stood 60 feet from each other, separated by four lanes of pavement and a thousand miles of perception.

Stephens was wearing a T-shirt printed with a police shield bearing the phrase “OFFICER DARREN WILSON I STAND BY YOU,” as part of a rally supporting the white policeman who killed 18-year-old Michael Brown, who was unarmed. Jones was across the street, holding up a sign that said, in blood-red letters: “Darren Wilson is a Murderer.”

There was no overlap in the facts as seen by Jones and Stephens at the demonstrations staged a few miles from suburban Ferguson, where Brown was killed. Like many who have closely followed the case, which sparked riots and yet another national racial conflagration, Jones and Stephens had made up their minds.

Like uncounted numbers of Americans, they saw no gray area in the killing of Michael Brown.

Many are convinced there was no justification for Wilson to kill Brown because he was unarmed. Many others are certain it was justifiable because they believe Brown threatened Wilson.

But the national furor over Ferguson is fueled by those with strong opinions. They are the people still marching, or calling Brown a thug, or demanding that Wilson be convicted, or implying that Brown deserved his death.

Such strong opinions can often be influenced by “confirmation bias,” psychologists say. A large body of research shows that people search for evidence to support their preexisting viewpoints — and then interpret that information in a way that reinforces their beliefs.

“It’s the tendency to seek out and give greater weight to information that confirms what we think rather than contradicts it,” said Scott Plous, a psychology professor at Wesleyan University in Connecticut.

Confirmation bias seemed to be running rampant at the dueling demonstrations.

About 100 Wilson backers, nearly all of them white, gathered outside of Barney’s Sports Pub in St. Louis late last month, brandishing signs like “Heroes Have A Right To Protect Themselves.” A multiracial group of about a dozen Brown supporters stood across the street. Passing drivers honked in support of one side or the other, screamed obscenities, or raised middle fingers out of windows.

Jones stalked the sidewalk with a silent, smoldering gaze. Asked why his sign called Wilson a murderer, he said Brown was unarmed and was shot with his hands up.

What about the police statement that Brown tried to grab Wilson’s weapon?

“Where his witnesses at?” Jones demanded. “(Brown) ran away. He was unarmed.”

“Use a stun gun. Taser,” Jones added. “The facts are, Darren Wilson fired a multitude of six shots into an 18-year-old, who was unarmed . two shots in the arm, the rest in the head and upper torso.”

An autopsy by the Brown family said Brown was hit with four shots in the arm and two in the head.

Might any information emerge that could change Jones’ mind?

Across the street, questions about the case were met with a different selection of facts.

People at the Wilson rally brought up the arrest record of Dorian Johnson, the first witness, who said Brown was shot in the back (autopsies indicate the bullets hit him from the front) and with his hands up.

They were quick to mention two unverified accounts that provided support for those who argue Brown rushed toward the officer.

No mention was made of the other three witnesses — Tiffany Mitchell, Piaget Crenshaw and James McKnight — who also said they saw Brown’s hands up. None of those witnesses described Brown rushing toward the officer.

Wilson’s supporters mentioned that Brown stole a box of cigars from a store and roughly shoved the clerk minutes before he encountered Wilson.

“That’d say something about your character, right? And then you might start a fight with a cop?” said a plumber who gave his name as James Edwards.

Edwards mentioned a report, based on anonymous sources, that Wilson’s orbital eye socket was fractured. But what about another anonymously sourced report that there was no fracture?

“I don’t know if it’s true or not. It makes no difference. He had facial wounds when he was hit. He was 100 percent right to shoot,” Edwards said, as a passing driver honked in solidarity.

Stephens, one of many people wearing the Wilson badge T-shirts selling for $20, said that if Brown grabbed Wilson’s weapon and assaulted him, “that gives him every right to shoot him.”

At first Stephens said he could see a gray area in the case because there was so much unconfirmed information circulating. Then he said, “If we assume this officer’s account is accurate, there is no gray area in the state of Missouri,” meaning he believed what Wilson did was legal under state law.

Several witnesses described Brown breaking away from Wilson and running away. They recalled the officer firing shots at the fleeing Brown, and then Brown stopping.

The crucial question is what happened next.

The rallying cry of “Hands Up, Don’t Shoot” has become a powerful symbol of Brown’s death. But could “Hands Up” be more myth than fact?

Alternatively, could Wilson, facing possible criminal charges over his decision to shoot, have exaggerated Brown’s aggression, shading his statement of facts about what happened?

With so much incomplete and sometimes conflicting information, some confirmation bias is bound to occur.

“If one were to view a police officer pointing a gun at someone, and they also view police negatively, they may very well ignore whatever events precipitated the officer drawing his/her weapon, even though that action may have been entirely justifiable,” Lou Manza, chair of the psychology department at Lebanon Valley College in Pennsylvania, said in an email.

“On the other side,” he said, “if one has a favorable view of police, they’re going to ignore the alleged assailant’s behavior, and simply assume that the police officer is correct, despite the fact that the officer may very well be wrong and unjustified in their actions.”

“Confirmation bias is a subtle but strong effect,” Manza said, “and once a belief is established, it can be VERY difficult to change it.”

This helps to explain why Brown’s killing, currently being considered by a Missouri grand jury, has revived a dynamic seen in racial controversy after controversy, from O.J. Simpson to Rodney King to Trayvon Martin: People look at the same information and come to very different conclusions.

“There is a void, and into that void, people will bring whatever they regard as the most reasonable evidence,” he said. “People are trying to make sense of this tragedy using the most compelling evidence they have available.”

Such as their own perspectives and experiences.

“We’re forced to reconstruct, to remember, to imagine what could have taken place,” Plous said, “and those are precisely the conditions when we’re likely to see bias.”

Jesse Washington covers race and ethnicity for The Associated Press. He is reachable at http://www.twitter.com/jessewashington