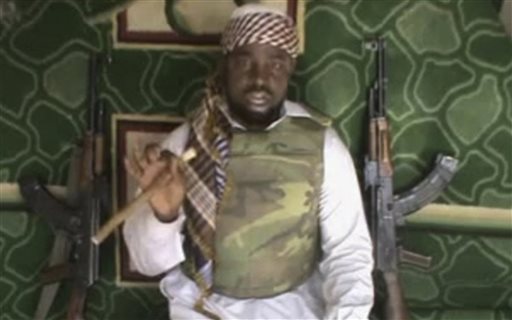 This file image made available from Wednesday, Jan. 10, 2012, taken from video posted by Boko Haram sympathizers shows Imam Abubakar Shekau, the leader of the radical Islamist sect. Boko Haram militants dressed as soldiers slaughtered at least 200 civilians in three villages in northeastern Nigeria and the military failed to intervene even though it was warned that an attack was imminent, witnesses said on Thursday, June 5, 2014. (AP Photo/File)

(Reuters) – Some of the schoolgirls abducted by militant group Boko Haram may never return home, Nigeria’s influential former president Olusegun Obasanjo said, in some of the most pessimistic comments yet on their fate from a member of the country’s elite.

Obasanjo said President Goodluck Jonathan’s administration had taken too long to respond to the April mass abduction. Once Jonathan’s mentor and one of his strongest political allies, Obasanjo turned against him last December.

“I believe that some of them will never return. We will still be hearing about them many years from now,” Obasanjo told the BBC’s Hausa-language radio service on Thursday, in comments echoed in an interview with Nigeria’s Premium Times website.

The warning from Obasanjo, who stepped down in 2007 and nurtured Jonathan’s own rise to power, will dismay parents who have now waited 60 days for any news of their daughters, taken from a school in the village of Chibok in northeast Nigeria.

Kerry: US Open to Talks with Iran Over Iraq