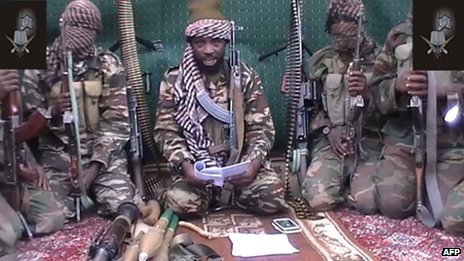 MAIDUGURI, Nigeria (AP) — Boko Haram, the Islamic extremist group, claims it has added the city of Gwoza to an Islamic state that it has established in northeastern Nigeria.

Boko Haram’s leader, Abubakar Shekau, said that Gwoza is now part of its “Islamic Caliphate” in a video seen on Sunday.

But Nigeria’s army said on Twitter: “That claim is empty … the Nigerian state is still intact.”

President Goodluck Jonathan declared a state of emergency in three northeastern states in May last year, saying the militants had taken over parts of Borno state, Boko Haram’s birthplace.

After the emergency was imposed, the military seemed to be gaining control of parts of the northeast, sending militants fleeing into neighboring states. But Boko Haram’s violent attacks have increased, killing thousands this year.

Copyright 2014 The Associated Press. All rights reserved. This material may not be published, broadcast, rewritten or redistributed.
###

U.S.-Africa Relations: Beyond the Summit