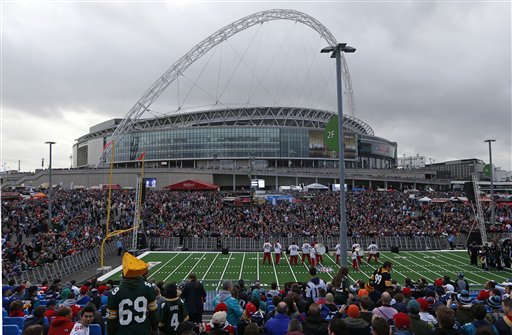 This is a Sunday, Oct. 27, 2013 file photo of a band as it entertains supporters as they arrive at Wembley Stadium in London to watch the NFL football game between San Francisco 49ers and Jacksonville Jaguars. The NFL said Wednesday July 8, 2015 taht it will play at least two games per year at Premier League club Tottenham’s new stadium in London over a 10-year period. (AP Photo/Sang Tan, File)

LONDON (AP) — The NFL will play a minimum of two regular-season games a year at Premier League club Tottenham’s new stadium over a 10-year period under a deal announced Wednesday.

Tottenham’s new 61,000-seat stadium is expected to open in the summer of 2018 and will feature a retractable grass field with an artificial surface underneath that would be used for NFL games.

“With growing enthusiasm for the NFL in the United Kingdom, we are committed to hosting NFL games in world-class venues and are excited to partner with Tottenham Hotspur to play games at their future stadium,” NFL Commissioner Roger Goodell said in a statement.

The NFL currently has two years remaining on its deal with Wembley Stadium, where it has staged 11 regular-season games since 2007. Wembley will host three more NFL games this year.

The NFL said t is “optimistic” the relationship with Wembley will be extended beyond 2016.

However, the NFL said games may also be played at different U.K. venues during the span of the 10-year agreement with Tottenham.

“We have an opportunity now to deliver one of the most unique sporting and entertainment venues in the world, bringing together the EPL and NFL for the first time,” Tottenham chairman Daniel Levy added

In 2012, the Jacksonville Jaguars signed a deal to play at least one-regular season home game at Wembley for four seasons until 2016.

Athletes Allege Abuse and Racism at University of Illinois