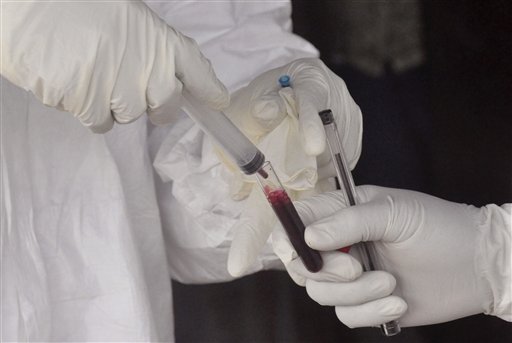 Health workers take a blood specimen from a child to test for the Ebola virus in a area were a 17-year old boy died from the virus on the outskirts of Monrovia, Liberia, Tuesday, June 30, 2015. (AP Photo/ Abbas Dulleh)

The path to zero cases, however, remains a challenge as the West African nations that have seen most of the more than 11,200 deaths from Ebola — Sierra Leone, Guinea and Liberia — head into rainy season.

“Zero is an achievable goal in the near term, there’s no question, but there are a lot of hazards between here and there, a lot of rain, still a lot of missing contacts,” Dr. Bruce Aylward, WHO’s Ebola head, said from Geneva on Tuesday.

WHO reported two confirmed cases of Ebola —one in Guinea and one in Sierra Leone— in the week ending Aug. 2. It credited strengthened contact tracing and investigations for what it said was the lowest weekly total since March 2014.

This week, Sierra Leone has reported two new cases, both relatives of a man who died from Ebola in Tonkolili, an area that hadn’t seen the deadly virus in months.

Nearly 2,000 contacts are being monitored across five prefectures in Guinea and four districts in Sierra Leone, including 500 in the Tonkolili district, said WHO.

More cases are likely in the coming weeks in Guinea and Sierra Leone.

“There’s two or three areas still at particularly high risk of having a flare (of cases),” Dr. Aylward said.

WHO also said in its report that while a vaccine tested in Guinea may prove effective, “more conclusive evidence is needed.” Last week, WHO’s chief Dr. Margaret Chan described the shot as a potential “game-changer.”