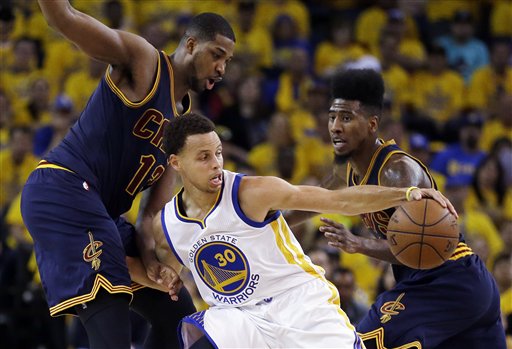 Golden State Warriors guard Stephen Curry (30) tries to control the ball as he is guarded by Cleveland Cavaliers center Tristan Thompson (13) and guard Iman Shumpert during the first half of Game 2 of basketball’s NBA Finals in Oakland, Calif., Sunday, June 7, 2015. (AP Photo/Ben Margot)

(Reviewed) – If you’re a die-hard NBA fan, the league just made it a lot easier to catch your favorite teams’ out-of-market games. NBA League Pass, the service that gets you all out-of-market games, has unveiled new pricing tiers that include single-game and single-team passes.

According to the official League Pass website, you can purchase a single out-of-market game for just $6.99—not much more than a Starbucks latte. It’s a huge savings if you’re not interested in buying the League Pass in its entirety, which comes in at $199.

The new pricing scheme also includes a $119 Team Pass, which will give you all out-of-market games for your favorite team. Unfortunately, League Pass notes that it won’t give you any in-market or nationally televised games, due to blackout rules.

Did Dana White Confirm That He Pays USA Today For UFC Coverage?