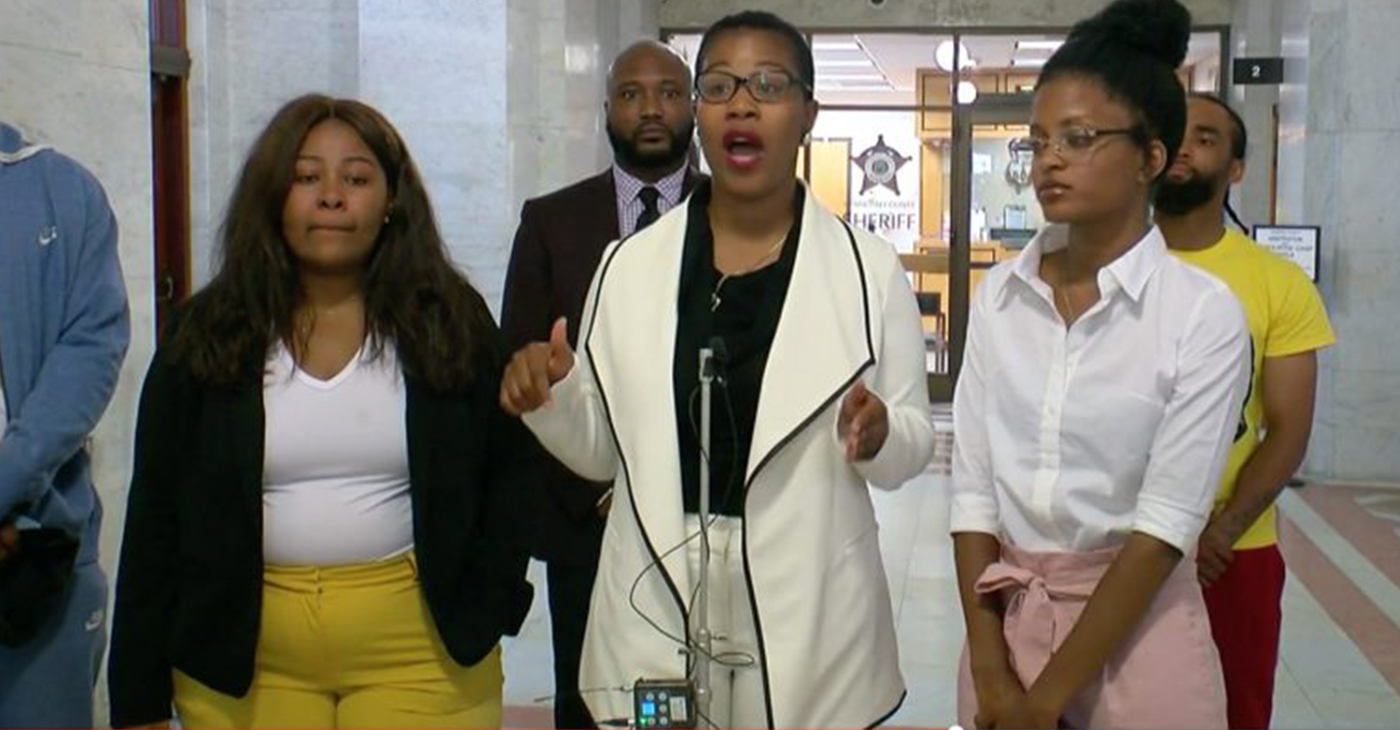 The NAACP Minneapolis has called for an apology and additional action from the Hennepin County Sheriff’s office after the arrest of two Black women last month by sheriff’s deputies.

Makala Moore, 19, and Taylor Kueng, 20, were charged with disorderly conduct and obstruction of the legal process after speaking out against the May 31 detainment of two Black men on Minneapolis’ Nicollet Mall for an open bottle infraction. The men, who the women did not know, were not charged or arrested.

“Two men take me down, put their knees in my back, twist my wrists, [while] I’m wearing a dress,” said Moore at a June 14 press conference addressing the “violent mishandling,” in her words, that she and Kueng endured.

An officer is then seen in the video threatening Kueng with a Taser after she resists arrest. When asked what she is being arrested for, the officer replies, “Because.”

“We want the sheriff’s office to apologize to these young women — and to Black people — because we recognize this is a systemic issue,” Leslie Redmond, president of the Minneapolis NAACP, told the MSR.

“For every Makala and Taylor, there are 1,000 other Makalas and Taylors that the NAACP doesn’t know about,” continued Redmond. She added that she wants the officers disciplined and actions put in place to better address police interactions with people of color.

“We also want them to have better protocols when people do come to them with these issues,” she said, in addition to funds for culturally-based training. “We want them to put the money where their mouth is…to make sure that their officers know that you can’t interact with the community like this. We need better results.”

Redmond described the roadblocks she faced after the incident was brought to her attention by a Mankato State University employee (who requested anonymity), where Kueng is a student. She began her inquiry by contacting Minneapolis Police Chief Medaria Arradondo.

“Yesterday, I had a meeting with Chief Arradondo. He looked at the video and was very concerned.” She said Arradondo sent a text to Hennepin County Sheriff Mike Hutchinson, who simply responded that he was out of town. She was then sent to Chief Sheriff’s Deputy Tracey Martin.

Redmond said after not receiving a satisfactory response from the sheriff’s office, she took her complaints to the American Civil Liberties Union (ACLU), requesting they use their relationship with the county prosecutor’s office to address the issue. This eventually led to the dismissal of all charges against the two witnesses.

“Record, record, record,” said Redmond regarding any interactions with police. “Get your own data. Don’t wait on theirs,” she said. “This video saved the day.”

“They are trying to silence us. I personally want to advocate for people to not be silent. When you see something, say something. MLK said, ‘Our life ends the day we remain silent about the things that matter.’”

Moore said that despite the arrests, “I would do it again. It was definitely traumatizing to go through all of it, but I am not going to stop speaking up for people who don’t know their rights and [have] police bullying them.”

Kueng added, “We need to keep speaking up so that this doesn’t become normalized.”

After viewing the video, City attorneys dropped the charges hours before the young women were to appear in court. In addition, after pressure from the NAACP, fees for the women’s expungement process were also waived.

Blacks being wrongfully arrested with unnecessary force in Minnesota is nothing new, says Mpls NAACP President Leslie Redmond. “We know police officers and sheriff officers in Minnesota know how to police. They just don’t know how to do it when it’s Black bodies,” she said during a press conference.

Alarms continue being sounded across the country for these violent police interactions. A June 17 episode of former CNN contributor Roland Martin’s Facebook Live “Daily Digital Show” addressed the issue with attorney Keith White. He represents Nicholas Simon, a 17-year-old teen who was assaulted and falsely charged by the New York Police Department June 12 while walking down the street dribbling a basketball.

“This is the type of policing that’s allowed to go on in marginalized communities,” said White. “It’s the most straightforward example of police abuse. I think the reason why it hasn’t gotten more uproar is because he survived.”

“Why do we need to have our young Black boys hashtagged in order for people to care?” continued White. “We have to continue to make noise in order for us to see changes.”

In another recent incident in Phoenix, police drew guns and violently arrested a man and his pregnant wife in front of their two young children. The officers were responding to a call that the couple’s four-year-old daughter walked out of a store with a doll without her parents’ knowledge. The mom was so frightened for her children’s safety that she gave them to strangers who witnessed the event.

Both events were captured on video.

Redmond also is using this incident to encourage more proactive versus reactive responses from members of the community.