Music Aside, Queen of Soul is Pumped for Fair Food
Advertisement 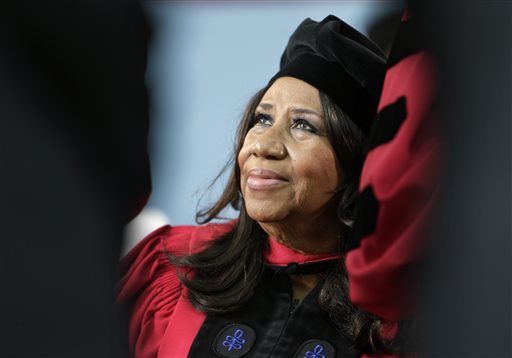 In a Thursday, May 29, 2014 file photo, singer Aretha Franklin looks up while seated on stage during Harvard University commencement ceremonies, in Cambridge, Mass. Franklin, the Queen of Soul says she’s looking forward to tracking down one of the powdered sugar-covered confections while she’s at the Ohio State Fair to perform on Thursday, July 31, 2014. (AP Photo/Steven Senne, File)

COLUMBUS, Ohio (AP) — Aretha Franklin is jazzed about more than music at the Ohio State Fair: She’s also looking forward to the food.

“I love the state fair, and I love the elephant ears,” says the Queen of Soul, who is scheduled to perform Thursday night.

There may be plenty of opportunities for fried, sugary treats ahead, given that her busy 2014 tour also includes performances at the Wisconsin and Minnesota state fairs in August.

Franklin made headlines last week while on tour after publicizing that a server at a Johnny Rockets restaurant in Niagara Falls, Ontario, screamed at her for trying to sit down to eat her takeout order. The franchise owner apologized, citing the employee’s youth and inexperience.

After some health issues, the 72-year-old R&B diva says she’s feeling as good as she did in her 50s.

She says she’s planning a vacation to New York after her Wisconsin gig, including a stop at the U.S. Open. She also is taking French lessons and studying classical piano with a Julliard graduate.

“I always wanted to go to Juilliard, but my schedule was so heavy at that time that it just never allowed me the time to go there for long enough to learn something,” she says.

Franklin says she has begun to hear the classical training in her style and inflections and expects audiences will, too. She aspires to be as good as legendary classical pianist Vladimir Horowitz or jazz greats Art Tatum or Oscar Peterson.

“That is the level I want to be playing at,” she says. “That’s the lifetime level.”

Her upcoming recording doesn’t have a name yet, but Franklin says she’s six tracks and five vocals into it. She expects to finish the final three cuts in August.

It features R&B classics such as “Midnight Train to Georgia,” ”What’s Love Got To Do With It,” Donna Summer’s disco classic “Last Dance” and Alicia Keys’ “Fallin’.”

Single Sensation: A Breakup with Jay Z Could Push Beyoncé’s Career to Even Greater Heights