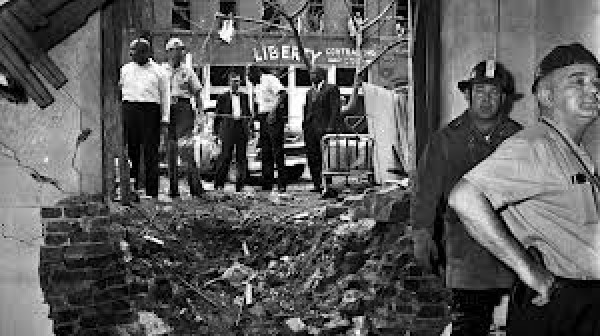 The tragedy occurred weeks after the March on Washington, where Martin Luther King Jr., delivered his famous “I Have a Dream” speech/Courtesy Photo

National recognition of one of the darkest days in American history and the tragic sacrifice of four innocent children is one step closer to reality.

Last week the U.S. House of Representatives voted 420-0 to award the Congressional Gold Medal, the highest civilian award the government can bestow, posthumously to the four young African-American girls who were killed in the 1963 bombing of the 16th Street Baptist Church in Birmingham, Ala.

If the bill is passed by the Senate, it will go to President Barack Obama for his signature.

The medals could be awarded to Addie Mae Collins, Denise McNair, Cynthia Wesley and Carole Robertson (all 14 and younger) in September, the 50th anniversary of the bombing. Twenty-two others –mostly children, were also injured.

This tragedy occurred weeks after the March on Washington, where Martin Luther King Jr., delivered his famous “I Have a Dream” speech.

Some relatives of the girls have reportedly told the press that they aren’t interested in accepting the medal.

Congresswoman Terri A. Sewell of Alabama and Congressman Spencer Bachus, both of Alabama, introduced the bill along with the entire Alabama delegation and Alabama natives Rep. John Lewis and Rep. Sanford Bishop, both of Georgia.

“Though we will never be able to replace the lives lost or the injuries suffered, this medal serves as a compelling reminder of the sacrifices so many freedom fighters made to help us achieve equality and social change,” said Sewell.

Sewell noted that it was an “honor” to have Dianne Braddock and Lisa McNair, sisters of Carole Robertson and Denise McNair, join her in Washington on April 25 for the passage of the bill.

“The bombing of the 16th Street Baptist Church in Birmingham, which killed four innocent young girls and injured nearly two dozen people, shocked the conscience of our nation and led to the passage of a landmark civil rights law,” said Bachus.

“A Congressional Gold Medal would be a fitting commemoration of the lasting legacy of four beautiful little girls who, in losing their lives far too early, changed America permanently. Great progress has been made in Alabama and our nation during the half-century since that horrific bombing, but we should always be mindful of the hard journey that so many had to take to secure the color-blind rights guaranteed by the U.S. Constitution.”

“I’m very happy that the House has passed this bill,” said Dianne Braddock, the older sister of Carole Robertson. “Fifty years later, we recognize not only the four little girls but the sacrifices of their families and how their sacrifices brought progress in this country.”

Lisa McNair, the younger sister of Denise McNair, expressed her gratitude to Sewell and Bachus.

“I’m so excited about this wonderful honor, and I can’t wait to get home and share this information with my mother. She will be thrilled. I hope the Senate will vote favorably as well,” she said.

Radio and talk show host Tavis Smiley has advocated for the girls being honored with the gold medal for some time.

“These four precious martyred heroines will finally get the recognition and respect their ultimate sacrifice warrants,” said Smiley. “What an honor to have played even a small part in arousing the public’s consciousness about this historic opportunity.”

Race Activists Claim Past to Improve the Future