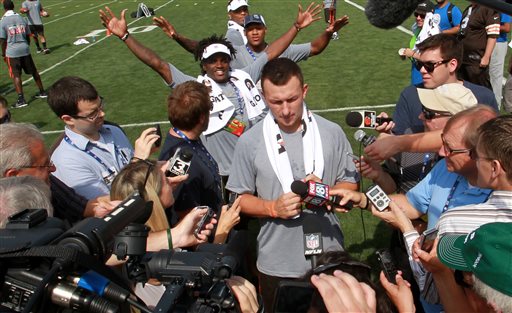 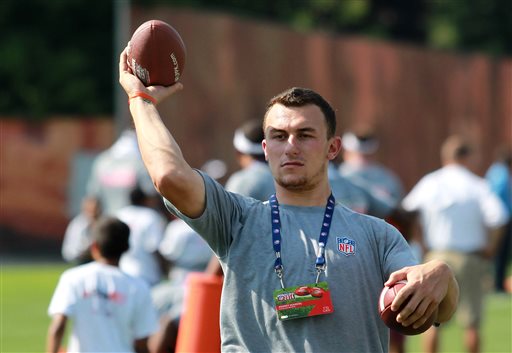 Tired of scrutiny about how he spends his weekends away from football and drained by the spotlight that follows him, Browns rookie quarterback Johnny Manziel said he has no plans to tone down his lifestyle.

“I don’t think I’m doing anything wrong,” he said.

Speaking at a PLAY 60 event with other AFC rookies, Manziel said he’s been bothered by recent criticism about his behavior.

Since being drafted by the Browns in the first round in May, Manziel’s weekend adventures — hanging out poolside with Patriots tight end Rob Gronkowski in Las Vegas, photographed on a swan raft while drinking champagne, shown in a video talking into a stack of money as if it were a phone — have added to the legend of Johnny Football.

Manziel understands it may not be a good look, but he’s not a party animal.

“I’m going out,” he said. “Everybody goes out on the weekends and enjoys their life and lives their life. And just for them, they don’t have people that when they walk into a place pull out their phones and all they want to do is follow me around and record everything. My situation is unique and different and now more than ever I’ve seen that it’s an every weekend thing wherever I’m at — whether it’s in Cleveland on a weekend, or in Dallas or anywhere on a weekend, people want to record what I’m doing because they think it’s a story.

In the past few days, Hall of Famers Emmitt Smith, Joe Montana and Warren Moon have all said Manziel should focus on his playing career, and it might help if he curtailed some of the other stuff.

Manziel respects the opinions of the legends, but says some of the media reports about him have been distorted.

“Just what’s getting out on social media doesn’t mean that’s all I’m doing in my life,” he said. “Just my weekends aren’t what I’m doing, seven days a week. That’s two days out of the week and there’s five to six other days when I’m here at this building going through my playbook and working out just like every other rookie, so nothing that I’m doing on the weekends is affecting my job.”

Manziel spent the morning throwing touchdown passes to wide-eyed youngsters, who were thrilled to be around him. Manziel greeted each with a high-five or handshake and “What’s up?” As they put the kids through some drills, the Browns’ other rookies enjoyed giving Manziel a hard time about his celebrity.

“Which one of us is Johnny Manziel?” linebacker Chris Kirksey asked one group.

Manziel said the endless attention on him has made things tougher for teammates, who have been asked for their take on all things Johnny.

“They’re tired of that,” he said. “They’re tired of the hype. I’m tired of it as well. I want to wake up one week and not have my name going through something and I’m working on getting better at that. But if I want to go home and spend time with my friends or go out on my weekends, I absolutely have the right to do that.”

Browns coach Mike Pettine has said the team will not intervene with Manziel — or any of Cleveland’s players — as long as they’re not involved in criminal activity and it’s not affecting their work.

Manziel said the Browns have not told him to “cool it.”

“I’m not going to change who I am for anybody,” he said. “I’m growing up and continuing to learn from my mistakes and trying not to make the same ones over and over again, but am I going to live in a shell or am I just going to hide from everybody and not do anything?

“That’s I think what everybody else does and that’s what I should do.”

A Rude Welcome Back for Tiger Woods

US Ready to Take on Belgium in World Cup