Madness and Creativity: Is Genetic Vulnerability to One a Source of Strength in the Other?
Advertisement 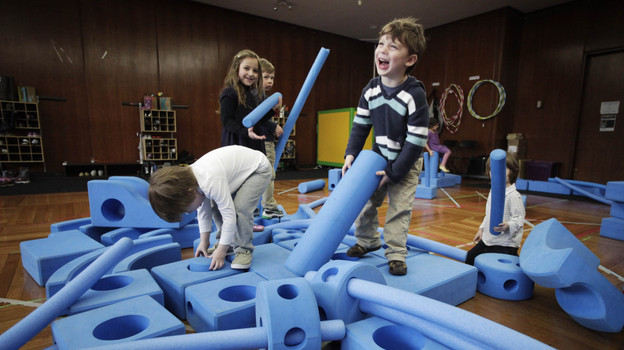 Children play with blue foam building blocks at the Blue School in New York City on March 31. The private preschool was founded by members of the Blue Man Group who wanted to send their own children to a school they felt supported creativity. (AP Photo)

(Los Angeles Times) – From the earliest Western philosophers to the most technologically-equipped neuroscientists, the apparent connection between creative genius and mental illness has been a source of fascination and study. In the end, it may be geneticists – aided by the people of Iceland – who show that link is real.

A new study finds that, compared with people employed in occupations not defined as creative, people who pursue careers in writing or visual and performing arts are more likely to carry genetic variations predisposing them to developing psychosis – the kinds of serious disturbances of thinking and emotion seen in schizophrenia and bipolar disorder.

In Iceland, people affiliated with national societies of dancers, writers, musicians and visual artists were 17% more likely than those outside those professions to have a genetic vulnerability to schizophrenia or bipolar disorder than did Icelanders working in other fields.

Data from four large studies conducted in Sweden and the Netherlands – comprising an additional 35,000 people – suggested an even stronger link between genetic propensity to mental illness and creativity: In those, people working in creative fields were 25% more likely than those who were not to carry a strong genetic propensity to develop mental illness. That offered further confirmation of the findings from Iceland.

THE RELIGION CORNER: MSG Foods — What You Really Need To Know (Pt. 1)