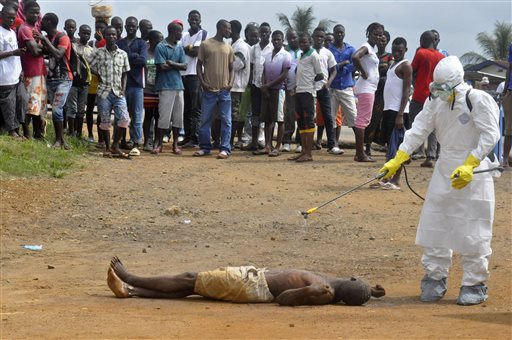 In this Sept. 4, 2014, file photo, a health worker, right, sprays a man with disinfectant chemicals after he is suspected of dying due to the Ebola virus as people, rear, look on in Monrovia, Liberia. Six months into the biggest-ever Ebola outbreak, scientists say theyve learned more about how the potentially lethal virus behaves and how future outbreaks might be stopped. The first cases of Ebola were reported in Guinea by the World Health Organization on March 23. (AP Photo/Abbas Dulleh, File)

LONDON (AP) — Six months into the biggest-ever Ebola outbreak, scientists say they know more about how the deadly virus behaves. The first cases were reported in Guinea by the World Health Organization on March 23 — before spreading to Sierra Leone, Liberia and elsewhere. Here’s a look at what scientists have learned so far.

HOW DIFFERENT IS THIS OUTBREAK?

Past outbreaks have mostly been in remote, rural communities and have typically been snuffed out in weeks or months. But one main difference this time is that the virus has hit densely packed cities in West Africa, making the current outbreak an international threat.

“I always thought Ebola was really bad when it happens, but that it would kill 100 people in a remote part of Africa, and then it’s over,” said Dr. Peter Piot, the co-discoverer of Ebola. He said the severity of this outbreak could also be linked to the increased movement of people across borders and “more contact with whatever the primary source of Ebola is.” The virus’ reservoir is thought to be fruit bats, considered a delicacy in some parts of Africa.

In a study released Tuesday by the New England Journal of Medicine, the World Health Organization said there could be almost 21,000 Ebola cases by early November and that cases could continue to trickle out for years.

WILL THIS OUTBREAK JUST BURN ITSELF OUT?

Yes, but that’s a worst case scenario. If control measures don’t work, at some point, Ebola will have infected everyone who hasn’t already been killed or recovered from the virus and there won’t be enough people to maintain the virus’ spread, said Dr. Bruce Aylward, WHO assistant director-general in charge of emergencies. He said the next few months are crucial to curbing transmission.

“As this outbreak continues, the sheer caseload will make it much more difficult to get people isolated and into beds,” he said.

“The way Ebola has spread so far, it’s hard to believe it will just die out,” added Dr. Heinz Feldmann, chief of virology at the U.S. National Institute of Allergy and Infectious Disease. “At some point it will, but how long is that going to take and how many people have to die for that to happen?”

We don’t know. Experts say it’s difficult to assess that in the current outbreak since so many issues are involved. It’s possible the virus has become more infectious than before — which might explain the spiraling caseload — but it’s also possible health workers aren’t properly protected or are so overworked they are making more mistakes. There has also been more physical violence involving patients, many of whom are suspicious of Western aid workers. This has led to risky situations that might increase the chances of getting infected, said Michael Osterholm, a professor at the University of Minnesota who advises the U.S. government on infectious diseases. Scientists have also noted hundreds of mutations in the virus so far but aren’t sure what that means, since viruses evolve constantly.

CAN ANYTHING BE DONE FOR PATIENTS NOT IN A HOSPITAL?

Maybe. Given the scarcity of hospital beds, health officials say authorities shouldn’t just focus on patients being treated in clinics. Some groups have started handing out basic protection kits they admit are woefully inadequate but better than nothing. Agencies including UNICEF, USAID and Doctors Without Borders have given out tens of thousands of Ebola kits, including gloves, aprons, face masks and garbage bags in Liberia, the worst-hit country. WHO notes that water and soap are still unavailable in some parts of West Africa.

“It’s a tragic situation, so we are helping arm people with the best possible solution in a worst-case scenario,” said Sarah Crowe, a UNICEF spokeswoman in Liberia. “So if they are going to have to use plastic bags to wipe up vomit of a sick person, then there is a correct method.”

The American aid agency, USAID, says only about half of Ebola patients are seeking treatment, so the kits and information about the disease are indispensable to fighting the outbreak.

This Could Prevent 80 Percent of Heart Attacks in Men