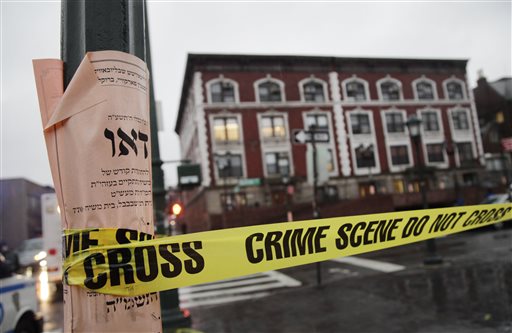 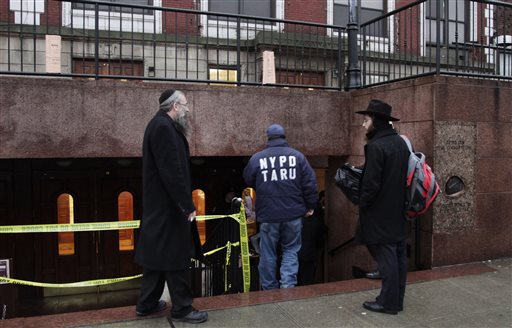 Members of the Lubavitch community watch a police officer enter Chabad-Lubavitch Hasidic headquarters, Tuesday, Dec. 9, 2014, in New York. A knife-wielding man stabbed an Israeli student inside the Brooklyn synagogue before being fatally shot by police after he refused to drop the knife. The student, Levi Rosenblatt, is in stable condition. (AP Photo/Mark Lennihan)

NEW YORK (AP) — An emotionally disturbed man stabbed an Israeli student in the head at an international Jewish organization in Brooklyn early Tuesday, then was shot and killed by a police officer after lunging at him with a knife, authorities said.

Calvin Peters, 49, can be seen on amateur video of the confrontation waving a knife in the Chabad-Lubavitch headquarters in Crown Heights at about 1:40 a.m. after police say he attacked Levi Rosenblat, who was studying inside, according to Chabad-Lubavitch spokesman Rabbi Motti Seligson. Rosenblat was stabbed in the temple, officials said, and was expected to survive.

A jerky clip of the confrontation posted online shows Peters in a waist-length jacket and hat with a knife in his right hand, surrounded by officers with drawn weapons and Jewish students wearing traditional Orthodox clothing.

Some of them appear to be trying to defuse the situation, urging Peters to calm down and asking officers not to shoot him.

Peters eventually puts the knife down at an officer’s urging and steps away, but quickly picks it up again as the officer approaches him, apparently in an attempt to place him under arrest. Officers then yell at him to drop the knife as Peters moves around unpredictably.

Out of view of the camera, a single gunshot is heard. Police say Peters lunged at the officer with the knife and was fatally shot once by an officer.

Peters had a documented history of mental illness and had been arrested 19 times since 1982, most recently in 2006 for drugs, police said. He had also been to the Chabad-Lubavitch before, which is open to the public at all hours.

Attorney Jeffrey A. St. Clair opened the Peters family’s front door in Valley Stream, New York, and said the man had a history of bi-polar disorder.

“Calvin Peters was a loving and devoted father,” he said. “And the family is quite frankly shocked and disappointed at what happened. Our prayers go out to the person that was injured. But we really ask that you respect our privacy and allow them to grieve.”

St. Clair said there were no recent incidents that would have caused alarm. “No,” he said. “Just total shock.”

Rosenblat, 22, was rushed to a hospital after being stabbed in the temple. He is in stable condition.

At least one witness said he heard Peters saying repeatedly “Kill the Jews,” according to Rabbi Chaim Landa, another Chabad-Lubavitch spokesman. But the case hasn’t been classified as a possible bias crime, police said. Peters was black.

Witness Chaim Grossbaum, who was studying at the center at the time of the attack, said he went back inside the building after escorting a bloodied, screaming Rosenblat outside to an ambulance.

That’s when he saw “this guy still walking around with his knife,” said Grossbaum, 19, of St. Paul, Minnesota. After initially putting down the weapon, he picked it up again, “and starts walking toward them and then the cops shoot him,” he said.

A 9-inch knife, with a 4 ½-inch blade, was recovered at the scene, police said.

“I’m told that the attacker came earlier that evening, too. He was stalking the scene. Thank God he didn’t inflict more harm nor do more damage to more people,” Hikind said in an email statement.

The Crown Heights neighborhood is home to a large ultra-Orthodox Lubavitch community and was the site of racially-charged riots in 1991 following the fatal stabbing of a rabbinical student.

Last month in Jerusalem, two Palestinian cousins wielding knives, meat cleavers, and a handgun stormed a synagogue killing four worshippers and a policeman. The two assailants were shot to death by police.

In 2012, a homeless man was arrested inside another Crown Heights synagogue. He was caught on video in a confrontation with two police officers who ordered him to leave the outreach center at the Aliya Institute. The charges were dropped after the synagogue said he was sleeping in a back room and had permission to be there.

The Religion Corner: My Cup Runneth Over