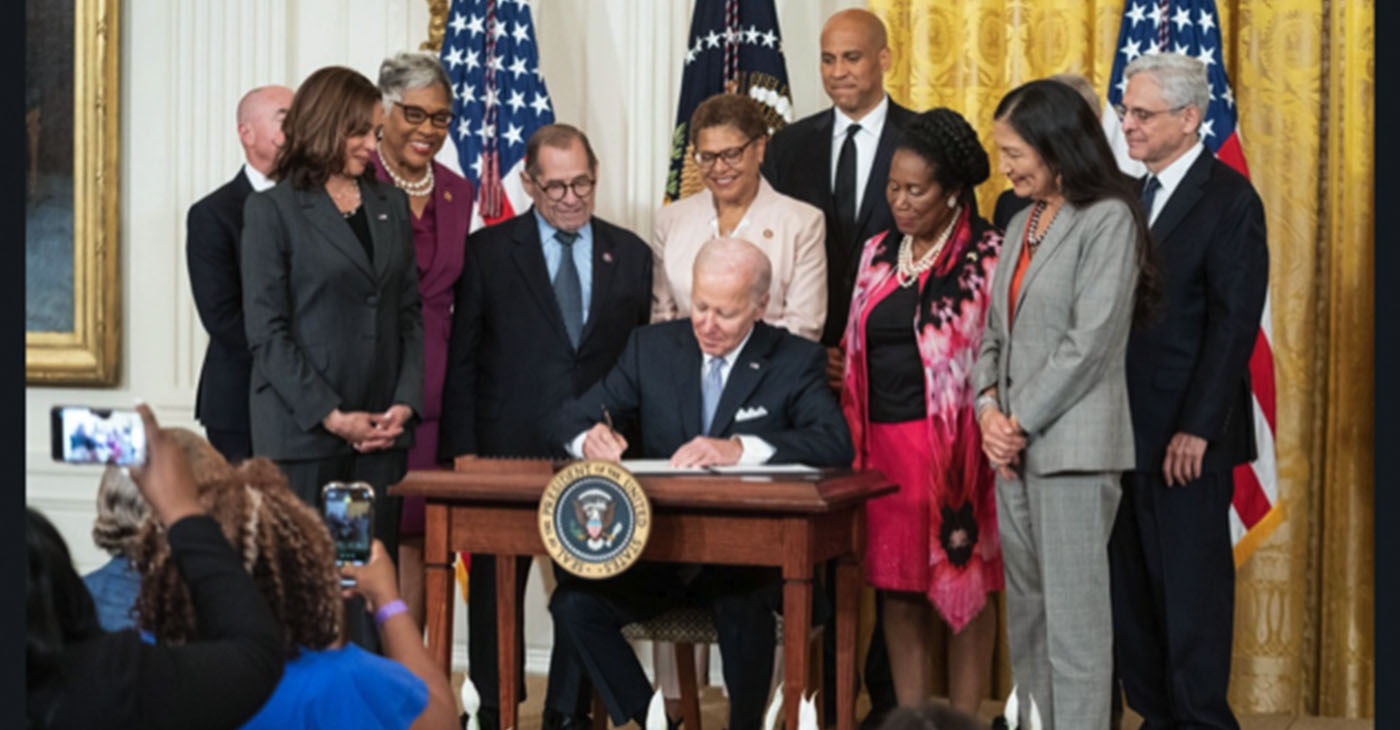 Rep. Karen Bass (D-CA-37), who is running for Mayor of Los Angeles, introduced the legislation that passed in the House of Representatives but has stalled in the Senate.

“When the Senate failed to act, [Sen. Cory Booker] and I went to the President and asked him to act,” Bass tweeted the day Biden signed the order.

“We worked closely with the White House and came up with an executive order that will help bring transparency and accountability to law enforcement,” she said.

The executive order establishes a new database for federal law enforcement officers, such as FBI or DEA agents, who have been fired for misconduct.

While state and local law enforcement agencies are not required to contribute to this database, there will be an avenue for them to participate in this process if they decide to do so.

“It will enhance accountability, improve transparency, and raise policing standards in an effort to help end the horrific incidents of violence that we often witness, like the murder of George Floyd,” Sen. Cory Booker (D-NJ) said in a statement. “That the families of those impacted by police violence, law enforcement groups representing our nation’s officers, and civil rights groups are standing with the administration in solidarity to embrace this executive order shows that positive change is possible.”

Los Angeles-based activist Kelli Todd Griffin, convener of the California Black Women’s Collective, believes that this executive order is “a step in the right direction,” but that there is still more work to be done to reduce violent police encounters.

“The executive order cannot do what Congress can do, but it can still address some of the critical issues,” Griffin said. “There’s got to be change in order to progress.”

Biden made a similar assertion during the signing event at the White House, where Bass was present.

“Members of Congress, including many here today like Senator Cory Booker and Congresswoman Karen Bass … spent countless hours on the George Floyd Justice in Policing Act to find a better answer to that question [of public trust and public safety]. I sincerely thank you all for your tireless efforts. But they’re not over,” Biden said.

Bass’s work on the bill has gained support from community leaders like Griffin.

“I want to make sure that I applaud Congressmember Karen Bass who stayed committed to ensuring this sea change moment happened,” Griffin stated. “She spent countless hours working with her colleagues, civil rights organizations and the Administration to develop an executive order that had substantial, systemic actions that can be taken. We needed her leadership and vision in this work.”

On the day of the signing, Booker took to Twitter to share a message of remembrance for George Floyd.

“He was a son, a father, a brother,” Booker said. “We all bear responsibility for a system that has allowed what happened to George Floyd to happen with such frequency. Changes are coming at the local, state, and national level. But more change is needed.”

40-Plus Miles of Pavement Preservation to Begin