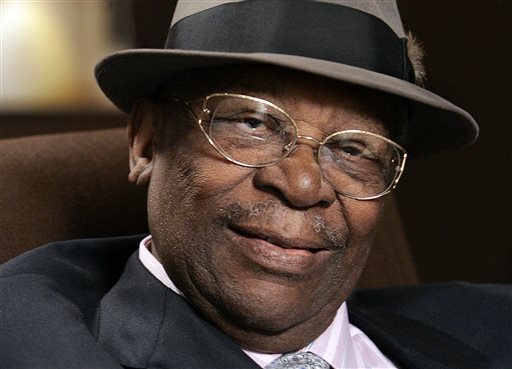 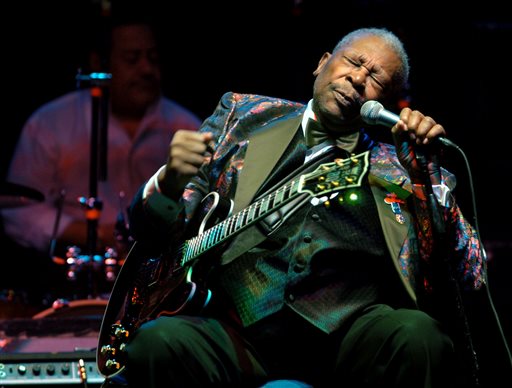 In this Feb. 16, 2007 file photo, B.B. King performs at the Wicomico Youth and Civic Center, in Salisbury, Md. King died Thursday, May 14, 2015, peacefully in his sleep at his Las Vegas home at age 89, his lawyer said. (Matthew S. Gunby/The Daily Times via AP)

LAS VEGAS (AP) — B.B. King, whose scorching guitar licks and heartfelt vocals made him the idol of generations of musicians and fans while earning him the nickname King of the Blues, died late Thursday at home in Las Vegas. He was 89.

His attorney, Brent Bryson, told The Associated Press that King died peacefully in his sleep at 9:40 p.m. PDT. He said funeral arrangements were underway.

King’s eldest surviving daughter Shirley King of the Chicago area said she was upset that she didn’t have a chance to see her father before he died.

Although he had continued to perform well into his 80s, the 15-time Grammy winner suffered from diabetes and had been in declining health during the past year. He collapsed during a concert in Chicago last October, later blaming dehydration and exhaustion. He had been in hospice care at his Las Vegas home.

For most of a career spanning nearly 70 years, Riley B. King was not only the undisputed king of the blues but a mentor to scores of guitarists, who included Eric Clapton, Otis Rush, Buddy Guy, Jimi Hendrix, John Mayall and Keith Richards. He recorded more than 50 albums and toured the world well into his 80s, often performing 250 or more concerts a year.

The result could bring chills to an audience, no more so than when King used it to full effect on his signature song, “The Thrill is Gone.” He would make his guitar shout and cry in anguish as he told the tale of forsaken love, then end with a guttural shouting of the final lines: “Now that it’s all over, all I can do is wish you well.”

His style was unusual. King didn’t like to sing and play at the same time, so he developed a call-and-response between him and Lucille.

“Sometimes I just think that there are more things to be said, to make the audience understand what I’m trying to do more,” King told The Associated Press in 2006. “When I’m singing, I don’t want you to just hear the melody. I want you to relive the story, because most of the songs have pretty good storytelling.”

A preacher uncle taught him to play, and he honed his technique in abject poverty in the Mississippi Delta, the birthplace of the blues.

“I’ve always tried to defend the idea that the blues doesn’t have to be sung by a person who comes from Mississippi, as I did,” he said in the 1988 book “Off the Record: An Oral History of Popular Music.”

Fellow travelers who took King up on that theory included Clapton, the British-born blues-rocker who collaborated with him on “Riding With the King,” a best-seller that won a Grammy in 2000 for best traditional blues album.

Still, the Delta’s influence was undeniable. King began picking cotton on tenant farms around Indianola, Mississippi, before he was a teenager, being paid as little as 35 cents for every 100 pounds, and was still working off sharecropping debts after he got out of the Army during World War Two.

“He goes back far enough to remember the sound of field hollers and the cornerstone blues figures, like Charley Patton and Robert Johnson,” ZZ Top guitarist Billy Gibbons once told Rolling Stone magazine.

King got his start in radio with a gospel quartet in Mississippi, but soon moved to Memphis, Tennessee, where a job as a disc jockey at WDIA gave him access to a wide range of recordings. He studied the great blues and jazz guitarists, including Django Reinhardt and T-Bone Walker, and played live music a few minutes each day as the “Beale Street Blues Boy,” later shortened to B.B.

Through his broadcasts and live performances, he quickly built up a following in the black community, and recorded his first R&B hit, “Three O’Clock Blues,” in 1951.

He began to break through to white audiences, particularly young rock fans, in the 1960s with albums like “Live at the Regal,” which would later be declared a historic sound recording worthy of preservation by the Library of Congress’ National Recording Registry.

He further expanded his audience with a 1968 appearance at the Newport Folk Festival and when he opened shows for the Rolling Stones in 1969.

Other Grammys included best male rhythm ‘n’ blues performance in 1971 for “The Thrill Is Gone,” best ethnic or traditional recording in 1982 for “There Must Be a Better World Somewhere” and best traditional blues recording or album several times. His final Grammy came in 2009 for best blues album for “One Kind Favor.”

Through it all, King modestly insisted he was simply maintaining a tradition.

“I’m just one who carried the baton because it was started long before me,” he told the AP in 2008.

Born Riley B. King on Sept. 16, 1925, on a tenant farm near Itta Bena, Mississippi, King was raised by his grandmother after his parents separated and his mother died. He worked as a sharecropper for five years in Kilmichael, an even smaller town, until his father found him and took him back to Indianola.

“I was a regular hand when I was 7. I picked cotton. I drove tractors. Children grew up not thinking that this is what they must do. We thought this was the thing to do to help your family,” he said.

When the weather was bad and he couldn’t work in the cotton fields, he walked 10 miles to a one-room school before dropping out in the 10th grade.

After he broke through as a musician, it appeared King might never stop performing. When he wasn’t recording, he toured the world relentlessly, playing 342 one-nighters in 1956. In 1989, he spent 300 days on the road. After he turned 80, he vowed he would cut back, and he did, somewhat, to about 100 shows a year.

He had 15 biological and adopted children. Family members say 11 survive.

Associated Press writers John Rogers and Mesfin Fekadu in Los Angeles contributed to this report.
Copyright 2015 The Associated Press. All rights reserved. This material may not be published, broadcast, rewritten or redistributed.

Pandora to Appeal Ruling That Could Raise Royalty Costs

What Made B.B. King Great: Stamina (Among Other Things)