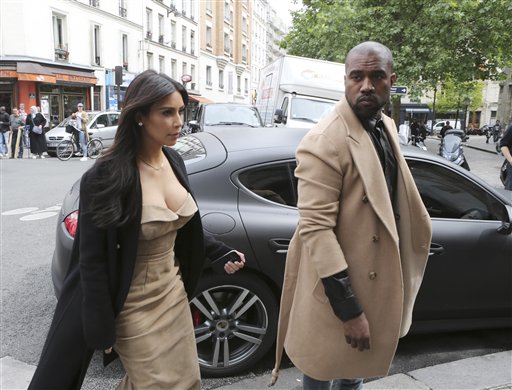 Kim Kardashian and U.S rap singer Kanye West arrive at a luxury shop in Paris, Wednesday, May 21, 2014. The gates of the Chateau de Versailles, once the digs of Louis XIV, will be thrown open to Kim Kardashian, Kanye West and their guests for a private evening this week ahead of their marriage (AP Photo/Jacques Brinon)

‘Keeping Up with the Kardashians’ star said “I grew up with siblings. If I could just snap my fingers and have four, I would have four. But I do realize I’m going to have to go through the pregnancy again and mine was really difficult. It was a really difficult pregnancy. Of course, I’d love to have another child, I would love two more, but we’ll see. I’m gonna have one more and see what it’s like.”

A source told US Weekly last week that “Kim wants North to have a sibling who isn’t too far apart in age.”

Speaking to Entertainment Tonight Kim said, “I’m hoping so” when popped the question about more Kardashians.