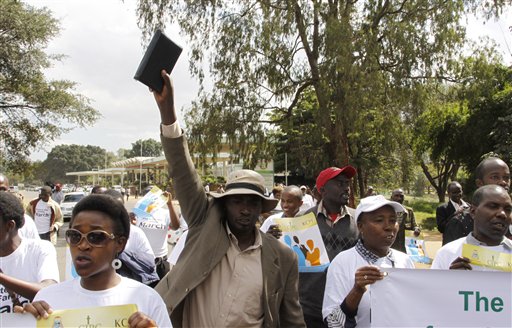 Members of various Christian groups march during a protest against gay and same sex unions in Nairobi, Kenya, Monday, July 6, 2015. A demonstration against homosexuality in Kenya has fizzled after attracting only a handful of protesters. The demonstration by about 35 people on July 6 was called by the Evangelical Alliance of Kenya and timed to coincide with the visit later this month of U.S. President Barack Obama. The group is calling on Obama not to advocate for gay rights during his visit to Africa July 24-28. (AP Photo/ Khalil Senosi)

Special to the NNPA from the New York Amsterdam News

Five Kenyan lawmakers have threatened to eject President Barack Obama from Parliament if he tries to lecture them about same-sex marriage during his upcoming visit.

Member of Parliament Cecily Mbarire also urged the government to reject any aid if it was tied to legalizing gay weddings.

Mbarire, who is an ordained cannon of the Anglican Church of Kenya, said allowing gay marriages would open “floodgates of evil synonymous with the biblical Sodom and Gomorra.” She urged Obama to exercise restraint and address only issues of benefit to the country, such as the state of the economy and terrorism.

“Liberal thoughts are being entertained in some countries under the guise of human rights,” said National Assembly Speaker Justin Muturi. “We must be vigilant and guard against [gay marriages]. We must lead an upright society … we have a responsibility to protect our children.”

But social media carried a different tone on the subject. Writing on the webpage of Kenya’s Daily Nation, readers listed corruption, poverty and terrorism as their major concerns.

“The same people who are so vocal on anti-gays have nothing to say about building enough schools and educating children from poor families,” commented “Simba,” among 76 commenters.

“The Speaker’s utterance is tantamount to inciting [people] against the state guest,” wrote “Barshi.” “Way forward: Listen to President Obama, but decide your path. Period.”

Martin Mugambi Kaburu Njue added, “No mention of the huge salaries you continue to enjoy while Kenyans languish in poverty and children die of hunger … Only you fat cats can refuse aid as you are at the apex of the food chain. Go explain to the dying child that they will not get the new hospital because two women or two men chose to love each other. The day you will decide to deal with the real issues affecting Kenya is the day you will deserve to be called leaders. Until then, you are charlatans trying to hoodwink Kenyans with non-issues.”

Obama is set to visit Kenya at the end of July to open the Global Entrepreneurship Summit.

Although Obama is not scheduled to tour the country, the table is already being set for him in the small village of Kogelo in western Kenya, home to a number of the president’s relatives

Mama Sarah, the third wife of Obama’s paternal grandfather, promised to cook a traditional meal for her grandson when he visits the East African nation, the birthplace of his father.

After Kenya, Obama will travel to Ethiopia, where he will become the first sitting American leader to visit the capital, Addis Ababa.

Viral Video of Boy, 13, Being Lynched Triggers Protests in Bangladesh