Keeping it Real: The Ladies of 'The Real'
Advertisement 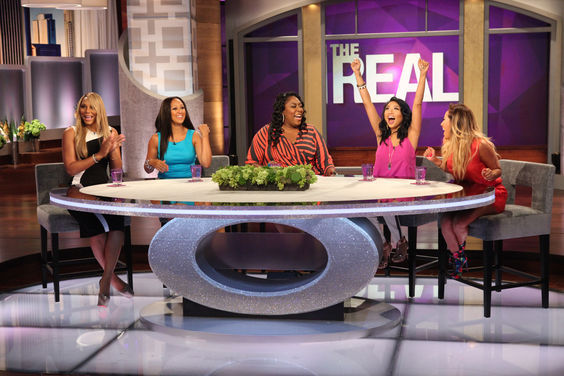 By Mary L. Datcher
Special to NNPA from The Windy City Word

THE REAL is a new one-hour, daily talk show hosted by the dynamic team of Tamar Braxton, Tamera Mowry-Housley, Loni Love, Jeannie Mai and Adrienne Bailon, that debuted Monday, September 15, 2014, on Fox Television Stations and in national syndication (check local listings), with a rebroadcast in primetime on BET. Led by five bold, diverse and outspoken hosts, these women reflect the home audience and unapologetically say what women are actually thinking. Their unique perspectives are brought to life through their candid conversations about topics ranging from their own personal lives to the news of the day to beauty, fashion and relationships.

We had a chance to catch up with the ladies during their promo tour and they had a lot to say in their high profile roles as the new daytime contenders. Having debuted last July in seven markets on Fox television station that included; New York, Los Angeles, Washington D.C., Philadelphia, Phoenix, Houston and Tampa, The Real was picked up for a second season with close to 98% stations picking up the show.

What made you feel that this show could work for each of your personalities?

“When I was approached to try a show like this because I am a standup comic-I’m accustomed to working by myself. But the idea to work on a show with a younger and hipper edge really enticed me.. When this opportunity came, I jumped on it. Fortunately, I made the cut and I’m very happy.  It’s historic because we’ve never had a show with all women of color and to present in such a way, whereas we’re talking about issues that people aren’t talking about or their afraid to really talk about ‘the real’. This is a great opportunity for us.”

I know each of you have your own special style and grace on fashion (pointing to Jeannie Mai). What is your targeted demographic? Tell me about your strategy.

“There isn’t a specific strategy that’s targeted on our style. There’s fashion every day on the show. We all have our own wish list of style and what we do with it. So, we try to do our segments and spread it out. We also try to highlight different things for different women to have fun. Once a month, we’ll give away a luxury bag to someone in the audience and also to someone watching from home. That’s always a dream come true. Fun trends that are happening; there’s fashion in most of the show and it showcases all of our styles. “

Do you feel your transition from the reality shows to co-hosting The Real will show viewers a different side of you?

“In Braxton Family Values, you see me being the sister and in Tamar and Vince, you see me being Tamar, the wife and on The Real you see me as Tamar, the girlfriend. The girl you go out to have cocktails with, the girl’s girl you can tell your secrets to that’s not going to tell your business and who is going to keep it real with you. She is going to keep it real with you at the end of the day.  I definitely think The Real allows me to show all faucets of my life and personality because I have a couple.” the Grammy nominated singer jokes.

Feeling at ease with each other, the co-hosts laughs and teases Tamar. Fellow co-host, Loni Love adds, “I want to put this in print. This is one of the hardest working persons in the industry. When I met her, she was pregnant and then she dropped the baby three weeks later. She has two reality shows, now she’s doing a talk show and then she did two albums and now she’s working on something else now.  When they say Black women don’t work-this one right here (points to Tamar) – she has got to have some Jamaican in her.” The room erupts in laughter and sister admiration of Tamar’s success.

Speaking of hard working, you’ve been working since in the business since you were an infant. What does this new platform mean to you?

“What people didn’t know about me but what they now know is that I love to talk. That’s how my sister and I got the part in Sister, Sister-we didn’t have to audition for it. We talked our way into the roles. I’m naturally and encourager-I love to encourage people, I love to help people. When I heard about a talk show, I was like ‘Wow! This could be a great platform to just speak to my fans. To speak to things that speak on a lot things that means something. Whether they need help dating, marriage or whatever because it’s just in me to encourage and help. Why not? Why not do this?”

What’s going to be the difference between you and Rosie Perez on The View for the Hispanic target?

“I think the age difference. What my experience has been growing up. My Mom is Puerto Rican and my Dad is Ecuadorian.  My first language is Spanish. My parents at home speak Spanish and my Dad does not speak English. Being first generation in this country; my Dad was born in Ecuador and my Mom born in Puerto Rico. I think for me a lot of young people growing up in this country that are first generation here, that have parents that don’t speak English. To have me being on a panel of an English speaking show makes a huge statement.

The Real is entering the arena of not only the day time talk show wars but a great pool of female contenders but this doesn’t daunt these ladies from displaying their unique and individual qualities.

Tamar is excited with the anticipation of a new single dropping within a week and making her directorial debut for the music video. Wearing multiple hats in the business is not an easy task, “I feel like I’m here for the dream. At any age-you can do whatever you want to do. You can be whoever you want to be but you have to work hard and you have to not give up on yourself. I’m thirty-seven years old. I know a lot of people and singers are afraid to tell their real age. I am proud to tell my real age. I’m 37 and I worked my behind off all of my life and I finally got to the point where I am proud of myself. Doesn’t matter if you’re 37, 47, 57, 67…never give up!” She explains.

What makes The Real different from other shows aside from the comedic side of Loni Love, the fashionista beauty with a humble Vietnamese upbringing of Jeannie Mai, the multi-talented, multi-tasking feisty attitude of Tamar Braxton, the former Cheetah Girl’s, Adrienne Bailon who carries the confidence and pride of her Latin roots along with the soulful balance of Tamera Mowry-Housley?